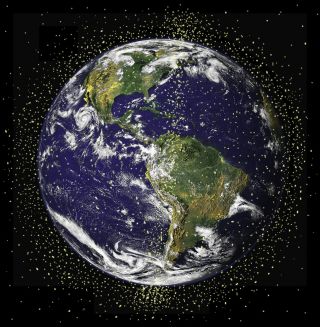 Nicholas Dallmann is a research engineer at Los Alamos National Laboratory, a U.S. Department of Energy facility. He contributed this article to Space.com's Expert Voices: Op-Ed & Insights. The project he describes is funded by Los Alamos Laboratory Directed Research and Development.

In the 2013 movie "Gravity," space junk nearly killed Sandra Bullock. While that story was most definitely fiction (and sensational fiction at that), the threat of space junk is real — so real that NASA has a whole office devoted to tracking and mitigating it. And last year marked the first international conference focused entirely on orbital debris.

There's good reason to be concerned. Currently, about 2,000 operational satellites orbit the Earth — not to mention another 3,000 non-operational ones — and that number is expected to skyrocket. This year, more than 1,500 satellites are scheduled for launch. (Compare this to 2018, when only 365 were launched.)

Space might be big, but it's getting increasingly crowded, and that's a real problem. Low Earth orbit, or LEO, where most satellites travel, is a natural resource. And just like other natural resources, we need to carefully manage it. All it takes is for a few satellites to collide to spur the Kessler effect: a runaway chain reaction where more debris results in more collisions, which could not only damage or destroy virtually every spacecraft in LEO, but render that part of space useless for decades.

But what if you could maneuver satellites on a collision course out of harm's way? Believe it or not, that's not easy to do. Most satellites sent into LEO — particularly small satellites and cubesats — don't have propulsion systems because they tend to be heavy and expensive. They also pose an additional risk to the rocket that's ferrying the satellite into space, as well as any other payloads hitching a ride. That's because the most common rocket propulsion system uses liquid rocket fuel, which is extremely volatile. If you're a small cubesat riding shotgun on a multimillion-dollar rocket and your fickle propulsion system blows up during launch or on the ride into outer space, you've ended the entire mission. Talk about a bad day.

The easiest solution is to use solid rocket fuel instead. It's high-thrust, much safer and low-cost, plus it can be stored for extremely long periods of time. But solid rocket fuel has one huge drawback: It can't be stopped and restarted. Once you ignite it, you have one burn. That's it. And that's a problem for avoiding debris. To avoid collision by changing orbit, you need at least two independent burns: one to rapidly move it out of the way, and one to put it back on its correct orbit. To de-orbit the satellite, you likely need multiple burns as well.

At Los Alamos National Laboratory, we're working to change this. We've recently developed and demonstrated the ability to stop and restart solid rocket motors many times — something that has never been done before.

A solid rocket is simple, with only a few major components. It includes a combustion chamber containing an ignition system and propellant, and an exhaust nozzle. We recently developed a safer propellant system with separated solid fuel and solid oxidizer. However, in order to make our solid rocket system capable of stopping and restarting, we needed to develop a reusable ignition system and a resettable way to extinguish a burn.

For ignition, we replaced traditional pyrotechnics with water. With our system, a satellite would launch with a small tank of benign water. Once on orbit and just prior to a burn, an electrolyzer would separate the water into hydrogen and oxygen gases. At the moment of ignition, the hydrogen and oxygen would be rapidly injected into the combustion chamber and lit by a spark. The resulting flame would ignite the solid propellant.

The next challenge was to figure out how to extinguish the burn. It has long been understood that a rapid decompression of the chamber can reliably cause a solid rocket to extinguish — but how best to do that? Last year, we developed an aerospike nozzle with a changeable choke area. Once the burn has achieved a desired velocity change, the choke area would be opened, decompressing the chamber and extinguishing the burn. When another burn of the rocket is needed, the choke area is reset to its original position. Repeat as needed.

We have recently demonstrated multiple independent burns from a single solid rocket in static test stands at Los Alamos. The next hurdle will be an on-orbit demonstration. We are working now to refine our system and looking for an opportunity for the demonstration.

We're also looking at developing a payload that is isolated from the main satellite and that contains its own power, has low-bandwidth communications with the ground, has attitude control to establish pointing for a burn and is equipped with our solid rocket system. With this payload, avoiding debris and de-orbiting could possibly be performed many years after the satellite has reached end-of-life.

Solid rockets are not the answer to all potential challenges for addressing the problem of space junk — but their simplicity, ease of scaling to the size of the spacecraft, high thrust and now multiple independent thrusts makes them a great candidate for avoiding orbital debris and deorbiting. Our hope is that someday, these rockets will ride aboard every satellite launched into space — keeping LEO safe and usable for millennia to come.