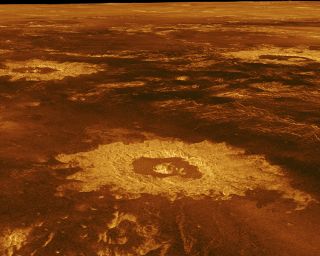 An image of craters on the surface of Venus produced by NASA's Magellan mission, which ended in 1994.
(Image: © NASA/JPL-Catech)

NASA has asked a team of scientists to figure out what they could learn from sending a major mission to Venus and how such a mission might work.

Last month, the team became one of 11 groups that NASA announced it would fund to study potential mission designs. Dubbed Venus Flagship, the mission would aim to answer questions about how habitable our evil-twin planet once was. Mission principal investigator Martha Gilmore, a geologist at Wesleyan University in Conn., offered an introduction to the project at a meeting on Nov. 8 of the Venus Exploration Analysis Group, which advises NASA.

Gilmore explained that the project was guided by looking for signs of past habitability on Venus. "It's always been important for Venus science; it is getting increasingly important and perhaps accessible and a little bit better understood," Gilmore said. "If we're going to tackle a problem like this, a flagship could do that."

Related: The Strange Case of Missing Lightning at Venus

The term flagship mission refers to a specific class of NASA project, the most expensive class in the planetary science division of the agency. (Flagship missions that are currently being built include the Europa Clipper mission, which aims to better understand the potential for life on Jupiter's icy moon.)

Recently, Venus scientists have typically focused their mission concept proposals exclusively on smaller classes. In addition to cheaper endeavors, the researchers want to convince NASA to dedicate the most expensive class of mission to Venus, which last saw a long-term U.S. spacecraft visitor in 1994. To better their odds, the team is still aiming to be a cheaper option for the agency's tight budget.

"We want to try to do this for $2 billion," Gilmore said. "Four billion dollars is a lot of money, and we are entering a decade where there are other things that are going to be competing for the money, most notably Europa."

If the Venus Flagship mission becomes a reality, it would be particularly complex. Spacecraft would include a main orbiter, two or more smaller orbiters, two short-lived landers that would study the atmosphere on the way down, a balloon-based aerial platform and a long-lived lander. (Venus is such a harsh environment that every spacecraft to land on its surface has ceased operations within hours.)

All of those components of the project would target three different aspects of habitability on Venus that the team has identified as both scientifically valuable and feasible. The first is understanding the history of volatile compounds like water, and how their presence or absence might affect the planet's potential for life. Instruments trying to address that question might include mineral and chemical identifiers on the surface and radar instruments in orbit.

The second question targets the climate history at the surface of Venus, and the modern relationship between the surface and the atmosphere. Key instruments used might include near-infrared imagers in orbit and chemical analysis on the surface.

Finally, the mission would seek to understand geologic activity on Venus and what might be driving it, which has long stumped scientists. That would include understanding the planet's interior structure, which could rely on a would-be seismometer that measures very deep rumblings called infrasound from a balloon.

Gilmore and her colleagues will submit a report to NASA, which will in turn provide it to the National Academies of Sciences decadal planetary science review process, which will govern NASA's goals beginning in 2023.

That timeline means that any major Venus mission is many years away. But without a process like this, such a spacecraft may never launch.

"Habitability, $2 billion; those are our challenges," Gilmore said.

Editor's note: This story has been updated to clarify the desired roles of different classes of mission to Venus. Email Meghan Bartels at mbartels@space.com or follow her @meghanbartels. Follow us on Twitter @Spacedotcom and on Facebook.