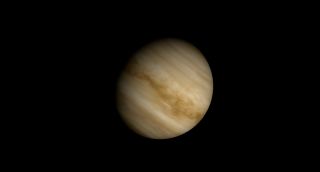 Venus will spend November hugging the west-southwestern horizon while steadily swinging wider of the evening sun and dropping farther south of the ecliptic. This apparition will be a poor one for mid-northern latitude observers, but a good one for more southerly observers. During November, Venus will maintain a very high visual magnitude of -3.86, allowing it to be easily seen, even while embedded within the evening twilight.
(Image: © Starry Night)

Ever since it returned to the evening sky just over a month ago, our "sister planet," as Venus is often called, has slowly become increasingly prominent in our early evening sky.

As Venus travels around the sun inside the Earth's orbit, it alternates regularly from evening to morning sky and back, spending about 9.5 months as an "evening star" and about the same length of time as a "morning star." Some ancient astronomers actually thought they were seeing two different celestial bodies. They named the morning star after Phosphorus, the harbinger of light, and the evening star for Hesperus, the son of Atlas. It was the Greek philosopher and mathematician Pythagoras who first realized that Phosphorus and Hesperus were one and the same object.

To the ancients, such behavior was puzzling and was not really understood until the time of Galileo. After moving to Pisa in the autumn of 1610, he started observing Venus through his crude telescope. One evening he noticed that a small slice seemed to be missing from Venus' disk. After several more months, Venus appeared in the shape of a crescent — in other words, it seemed to display the same phases as the moon. This was a major discovery, which ultimately helped to deliver a deathblow to the long-held concept of an Earth-centered universe.

Related: What Is a 'Morning Star,' and What Is an 'Evening Star'?

Venus wanders only a limited distance east or west of the sun, since, like Mercury, it is an "inferior" planet (orbiting the sun more closely than Earth does). Watching its movement is akin to watching an auto race from the grandstand: all the action takes place in front of you and it's necessary to turn only a limited amount either way to see it at all. In contrast, for "superior" planets (those located in orbits beyond the Earth from the sun), viewers on Earth are like the pit crews inside the racetrack who must turn in all directions to follow the cars.

When Venus is on the opposite side of the Sun from us, it appears full (or nearly so) and rather small because it is far from us. But because Venus moves with a greater velocity around the sun than Earth, it gradually gets closer and looms progressively larger in apparent size; the angle of sunlight striking it as seen from our Earthly vantage point also appears to change as well.

Ultimately, as Venus prepares to pass between the Earth and the sun it appears as a thinning crescent. And since at this point in its orbit it is nearly six times closer to us compared to when it was on the opposite side of the sun, Venus appears much larger to us as well.

Here is a schedule of how Venus' appearance will change during the coming months:

Nov. 29, 2019 — Venus is 89% illuminated. Despite the fact that it appears impressive to naked eye viewers, Venus is not much to look at through a telescope. Still on the far side of the sun at a distance of 136 million miles (219 million kilometers) from Earth, it appears as a small, almost full silvery disk.

Jan. 26, 2020 — Venus is 75% illuminated. Because it's still nearly 105 million miles (169 million km) from Earth, Venus continues to appear relatively small in telescopes. Nonetheless, as it continues to come around from behind the sun, the illumination angle has changed enough to show that it now appears distinctly gibbous in shape.

March 23, 2020 — Venus is equidistant from Earth and the sun. At 1 p.m. EDT in our solar system geometry, Venus now makes a right angle with both the sun and Earth and is equally distant (66.46 million miles, or 107 million km) from both.

March 24, 2020 — Venus reaches greatest eastern elongation. Venus arrives at its greatest angular distance east of the sun (46 degrees) on this date. The brilliant planet now swings as far to the east (left) of the sun as it will get from our Earthly viewpoint, setting four hours after sundown and continuing to wane in phase as well as slowly enlarging in size. In terms of apparent size, Venus now appears more than twice as large as it was at the end of January. In a telescope Venus is now a dazzling silvery-white "half-moon." A good observing project is to try determining Venus's time of dichotomy: when the planet appears exactly half lit. The dichotomy of Venus usually occurs when Venus should still appear slightly gibbous, roughly a week before greatest eastern elongation. In the nights that follow it gradually becomes a fat crescent while growing ever larger as it swings around in its orbit closer to Earth.

April 27, 2020 — Greatest illumination. Venus is now at the pinnacle of its great brilliance, shining at magnitude –4.7. It is so bright now that it can be seen easily with the naked eye in a deep blue, haze-free afternoon sky. It continues to approach the Earth while appearing to curve back in toward the sun in our sky. In a telescope it is now a big, beautiful crescent that grows larger and thinner with each passing night. The crescent can now be glimpsed even in steadily held binoculars. When Venus displays a full (or nearly full) disk, it appears relatively small. Conversely, when it appears very large, it's a very narrow crescent. Right now though, we're at the midpoint between these two extremes; hence the term "Greatest Illuminated Extent." Venus now stands 42 million miles from the Earth and on April 30 its disk will be 25 percent illuminated. It now appears nearly 40 percent larger in size than it did just one month ago.

May 14, 2020 — Venus is 12% illuminated. The crescent of Venus continues to narrow, but because it also continues to approach our Earth, it appears to greatly lengthen as well. It's now 32 million miles away. But Venus is now in a rapid plunge down the sky toward the Sun. Compare the appearance of its two cusps. Can you make out the crescent's "cusp extensions" — threadlike wisps of light extending beyond the crescent's points?

May 21, 2020 — Venus is just 6% illuminated: It is now critical to try and locate Venus as early as possible when it is still high in the sky in a steady atmosphere. Well before sunset is best. At sunset as seen from mid-northern latitudes, Venus stands about 15º above the west-northwest horizon and sets about 100 minutes later. Now 29 million miles from the Earth, Venus is becoming more and more aligned between us and the Sun and as such is turning more and more of its dark side toward us. In another week it will be all but gone from the evening sky.

June 3, 2020 — Inferior Conjunction. Venus will finally transition from an evening to morning star and will appear to pass between the Earth and the Sun on this day. Venus will then quickly bolts into the morning sky, where it can be observed by mid-month and remains as a prominent morning object through the balance of 2020.