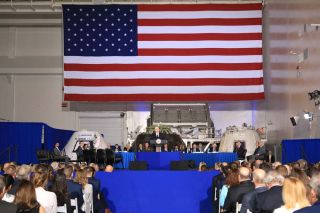 Vice President Mike Pence, chairman of the National Space Council, will convene and preside over the fifth meeting of the organization on March 26, 2019.
(Image: © Kim Shiflet/NASA)

The National Space Council (NSC) will convene today (March 26) for the fifth time, and you can watch it live.

The NSC meeting will focus on the United States' efforts to get humans back to the moon and then send people on to Mars and other distant destinations, NASA officials said. The meeting kicks off at 1 p.m. EDT (1700 GMT); watch it live here at Space.com, courtesy of NASA, or directly via NASA TV.

"Vice President Mike Pence, chairman of the council, will convene and preside over the meeting, which will include a report out from NASA Administrator Jim Bridenstine," NASA officials wrote in a media advisory.

"The meeting also will include reports from various other council members, two expert panels on human space exploration, and council discussion, from which Vice President Pence will provide policy recommendations for the president," they added.

The speakers on the second panel, "Ready to Explore," are Dan Dumbacher, executive director of the American Institute of Aeronautics and Astronautics; Jack Burns, a professor of astrophysical and planetary sciences at the University of Colorado at Boulder; and independent consultant Wanda Sigur.

President Donald Trump's Space Policy Directive 1, which was signed in December 2017, instructs NASA to get astronauts to the moon, and to use Earth's nearest neighbor as a stepping-stone to Mars. NASA's current moon plans include the construction of a small, moon-orbiting space station called the Gateway, which will serve as a jumping-off point to the lunar surface.

Assembly of the Gateway is scheduled to begin in 2022. NASA aims to put boots on the moon's gray dirt before the end of the 2020s.

The National Space Council helps steer America's space policy. President Trump reinstated the council in 2017; it had last been active in the early 1990s, during the presidency of George H.W. Bush.