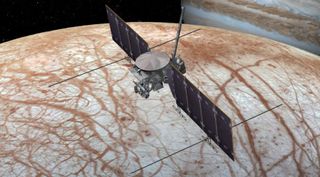 Citing cost growth, NASA has dropped plans to develop a magnetometer instrument selected in 2015 for the Europa Clipper mission, but will look for ways to add a less expensive version to the spacecraft.
(Image: © NASA)

WASHINGTON — NASA has removed an instrument previously selected for the Europa Clipper mission, citing cost growth, but will seek ways to replace it with a less complex design.

In a March 5 statement, NASA said that it would no longer pursue development of the Interior Characterization of Europa Using Magnetometry (ICEMAG) instrument, a magnetometer designed to measure the magnetic field around the icy moon of Jupiter. ICEMAG was one of nine instruments originally selected by NASA in 2015 for development for the Europa Clipper mission.

NASA said that the increasing cost of ICEMAG, still in its preliminary design phase, led to its removal from the mission. "I believe this decision was necessary as a result of continued, significant cost growth and remaining high cost risk for this investigation," Thomas Zurbuchen, NASA associate administrator for science, said in a memo.

In that memo, he said that ICEMAG exceeded a "cost trigger" last summer that had been put in place for it and other instruments to keep costs under control. That cost trigger escalated reviews of the instrument all the way to NASA Headquarters, including a briefing there Feb. 14. The key problem with the instrument was accommodating its "scalar vector helium sensors," used to measure the magnitude and direction of the magnetic field.

Zurbuchen said in the memo that, at the time of the February review, ICEMAG's estimated cost has grown to $45.6 million, $16 million above its original cost trigger and $8.3 million above a revised cost trigger established just a month earlier. That cost was also three times above the original estimate in the ICEMAG proposal.

"The level of cost growth on ICEMAG is not acceptable, and NASA considers the investigation to possess significant potential for additional cost growth," Zurbuchen wrote in the memo. "As a result, I decided to terminate the ICEMAG investigation."

NASA will instead pursue options for "a simpler, less complex" magnetometer on Europa Clipper, although the announcement contained few details about how that will be accomplished. Scientists who were part of the ICEMAG team will be invited to remain on the overall mission science team.

"A magnetometer investigation brings significant value to Europa science and exploration," Zurbchen said in the statement about ICEMAG's removal. "We have enough time before launch to find such a replacement and will move quickly to implement this."

Scientists consider the inclusion of a magnetometer particularly valuable for probing the interior of Europa, thought to contain a global ocean of liquid water. Data from the magnetometer on the Galileo spacecraft, which performed many flybys of Europa, detected variations in Jupiter's magnetic field in the vicinity of the moon that scientists said were likely caused by the presence of an electrically conductive fluid, like water, beneath the surface.

Scientists had hoped ICEMAG would provide more detailed magnetic field measurements that could constrain the depth, thickness and salinity of the ocean. That would help scientists assess the potential habitability of Europa, a key goal of the overall Europa Clipper mission.

"The nature of the subsurface ocean and how it interacts with the surface is critical to evaluating Europa's potential habitability," Carol Raymond of JPL, the principal investigator for ICEMAG, said in a 2015 statement about the instrument's selection. "Knowledge of the ocean properties helps us understand Europa's evolution and allows evaluation of processes that have cycled material between the depths and the surface."

Zurbuchen said that NASA was still committed to the overall Europa Clipper mission, but instituted the cost trigger process to manage the mission's overall costs and avoid increases that could upset the overall balance of the agency's planetary science programs. "We consider it a critical part of the mission portfolio of NASA Science, and am looking forward to see this development mature towards flight," he wrote in the memo.

The Europa Clipper mission benefited for years from the patronage of Rep. John Culberson (R-Texas), a House appropriator who became chairman of the subcommittee that funds NASA four years ago. Culberson was an unusually staunch advocate for both Europa Clipper and a follow-on lander, providing funding for the mission far above any NASA request for them. In the final fiscal year 2019 funding bill, passed in February but whose NASA provisions were finalized late last year, Europa Clipper received $545 million, more than double NASA's request of $264.7 million.

Culberson, though, lost re-election last November. While NASA says it remains committed to flying Europa Clipper, the mission is unlikely to see the increased funding provided to accelerate its development. The 2019 spending bill set a 2023 deadline for launching the mission, a year later than previous bills, but NASA's statement about the removal of ICEMAG said only that it plans to launch Europa Clipper "in the 2020s."