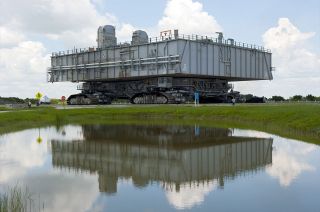 Mobile Launcher Platform-3 returns to the Vehicle Assembly Building after launch of space shuttle Atlantis on the STS-135 mission in 2011.
(Image: © NASA)

A mobile launch platform that 50 years ago supported the first moon landing will now find new use with a commercial rocket.

NASA held a ceremony on Friday morning (Aug. 16) to formally mark the provision of its Apollo 11-legacy mobile launcher to Northrop Grumman. The agency agreed to the company's use of the Mobile Launcher Platform-3 (MLP-3), as well as High Bay 2 inside the Vehicle Assembly Building (VAB) at the Kennedy Space Center in Florida to support Northrop Grumman's new OmegA launch vehicle.

"These facilities and assets were [also] used during the space shuttle program and are now available to commercial partners as part of the agency's plan in support of a multi-user spaceport," said NASA in a media advisory.

The culmination of three years of negotiations — NASA chose Northrop Grumman (previously Orbital ATK) for the prospective property use in 2016 — the agreement also includes a land lease to support the mobile launch platform's modification.

"It really is an honor to bring the first commercial system into this vertical assembly building," said Kent Rominger, Northrop Grumman's vice president for strategic programs and a former NASA astronaut who launched off MLP-3 for three of his five space shuttle missions. "We are utilizing Mobile [Launch] Platform-3, the very MLP that launched the Apollo 11 mission 50 years ago. So with OmegA, we truly are standing on the shoulders of the giants of space history."

In 2018, the U.S. Air Force Space and Missile Systems Center awarded a $792 million Launch Services Agreement to Northrop Grumman to continue OmegA's development. The facilities agreement with NASA is pursuant to that award, which also included funding for certification flights of OmegA's intermediate variant in 2021 and its heavy variant in 2024 (pending the Air Force selecting OmegA for the National Security Space Launch Phase 2 Launch Service Procurement).

Northrop Grumman intends to modify MLP-3 to be compatible with OmegA and with NASA's Launch Complex 39B, including the construction of a service tower that will extend well above the height of the 196-foot-tall (60-meter) rocket. The MLP will then be moved into the VAB's High Bay 2, where the launch vehicle will be vertically stacked before rolling out to the pad.

Mobile Launcher Platform-3 was numbered Mobile Launcher 1 (ML-1) when it was first used for the first flight of NASA's Saturn V rocket in November 1967. The platform then served Apollo 8, the first mission to fly humans to the moon, in 1968; Apollo 11, the first moon landing mission, in 1969; the three crewed launches to the Skylab orbital workshop in 1973; and the U.S. Saturn IB launch as part of the Apollo-Soyuz Test Project in 1975.

NASA then modified the hardware to support the space shuttle and relabeled it MLP-3. The platform was subsequently used in the launch of 32 shuttle missions, beginning with STS-32 in 1990. Its final use (to date) was the final liftoff of the shuttle program, STS-135, in July 2011.

High Bay 2 in the Vehicle (then Vertical) Assembly Building was initially configured to stack Saturn stages prior to the Apollo-era rocket rolling out to the launch pad. During the space shuttle program, the bay was used to inspect and store external tanks after they arrived from Louisiana and until they were needed for missions.

NASA utilized two other mobile launcher platforms during the Apollo and shuttle programs, both of which have no planned future use. The agency built a new MLP (and has contracted for the construction of a second) to support its Space Launch System (SLS) heavy-lift rocket, which will be stacked in High Bay 3 and use Pad 39B to launch missions to the moon.