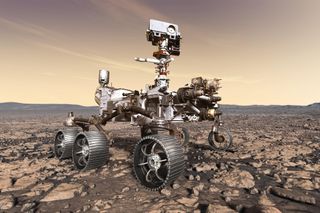 An artist's illustration of NASA's life-hunting Mars 2020 rover on the Red Planet's surface.
(Image: © Curiosity Didn't Find Life on Mars — But These 2 Future Rovers Might)

We may not have to wait much longer to get our first glimpse of E.T., NASA chief Jim Bridenstine said.

NASA has made the search for alien life a high priority, and recent discoveries give ample reason for optimism that the endeavor will be successful soon, Bridenstine said last week at a ceremony announcing the death of the agency's record-setting Opportunity Mars rover.

Appropriately enough given the occasion, the NASA chief singled out Mars as a particularly promising abode for life. He highlighted three intriguing finds: The Red Planet's surface hosts complex organic molecules, the carbon-based building blocks of life; in at least some locales, the potentially biogenic gas methane varies seasonally; and there's apparently a huge lake of liquid water beneath Mars' south pole. (The first two discoveries were made by NASA's Curiosity rover, and the third by Europe's Mars Express orbiter.) [The Search for Life on Mars: A Photo Timeline]

None of these observations guarantee that life exists, or ever existed, on Mars, but they do increase the probability, Bridenstine stressed.

"All of these things collude to say there is a lot we need to learn, and friends, we're going to do it quickly," Bridenstine said at the Feb. 13 event, which was held at NASA's Jet Propulsion Laboratory in Pasadena, California, the agency's go-to center for robotic interplanetary missions.

Opportunity and its twin, Spirit, were key players in this intensifying Mars life hunt. The two solar-powered rovers touched down a few weeks apart in January 2004, tasked with 90-day missions to search for signs of long-ago liquid water activity.

Both six-wheeled robots found lots of such evidence, firming up scientists' understanding that the Red Planet was a very different — and potentially habitable — world in the ancient past. And the duo kept rolling along far past their expiration dates. NASA didn't declare Spirit dead until 2011, and Opportunity was finally done in by a monster dust storm in June 2018 (though NASA kept trying to rouse the rover for eight months, and the official end therefore didn't come until the Feb. 13 announcement).

Spirit and Oppy handed the baton off to Curiosity, which landed inside the 96-mile-wide (154 kilometers) Gale Crater in August 2012 and is still going strong. The car-size rover has determined that Gale was home to a potentially habitable lake-and-stream system for long stretches in the distant past.

Curiosity is now roaming through the foothills of the 3.4-mile-high (5.5 km) mountain that rises from Gale's center, learning more about this ancient wet era and when and how it ended. The rover isn't equipped to seek out signs of Mars organisms, if any ever existed — but its cousin will soon launch to do just that.

NASA's Mars 2020 rover, whose body is based heavily on that of Curiosity, will lift off in July 2020 and touch down inside the 28-mile-wide (45 km) Jezero Crater in February 2021, if all goes according to plan. A deep lake once existed inside Jezero, and Mars 2020 will hunt for evidence of any life-forms that may once have called this water body home.

Mars 2020 will also collect and cache promising samples for eventual return to Earth, where scientists can pore over the Mars material in labs around the world. The retrieval mission is not yet on NASA's books, but the agency fully intends to get this done, Bridenstine said.

"We're going to be able to look at samples and determine if there's a biosignature in there," he said. "The goal is to discover life on another world; that's what we're trying to achieve. And because of so many great people in this room, friends, we are well on our way to doing that." [5 Bold Claims of Alien Life]

Another life-hunting rover is scheduled to launch and land at about the same time as Mars 2020. This deep-drilling robot — named Rosalind Franklin, after the pioneering crystallographer who played a pivotal role in teasing out DNA's double-helix structure — is the centerpiece of the second and final phase of the ExoMars program, a joint effort between the European Space Agency and Russia.

Mars isn't the only world NASA wants to explore for signs of E.T.. The agency is developing a mission to Jupiter's ocean-harboring moon Europa, which is widely regarded as one of the solar system's best bets to host alien life. This spacecraft, called Europa Clipper, will launch in the 2020s, and characterize the moon's subsurface ocean during dozens of flybys after it reaches the Jupiter system. Clipper will also scout out touchdown spots for a potential lander mission, which would hunt for signs of life on and just beneath Europa's icy surface.

NASA is also considering dropping a lander on Saturn's huge moon Titan, another possibly life-supporting world. This mission, called Dragonfly, would investigate the complex chemistry occurring on Titan, where organics swirl in a thick, nitrogen-dominated atmosphere that scientists believe resembles that of the early Earth.

Dragonfly would be able to fly from spot to spot on Titan's surface, using "quadcopter" technology similar to that employed by drones here on Earth. It's possible that Dragonfly could detect signs of Titan life — biomolecules, for example, or variations in hydrogen that indicate microbes are using this gas as an energy source.

Dragonfly is one of two finalists, along with a comet sample-return mission called CAESAR, for a mid-2020s launch slot under NASA's "New Frontiers" program. The winner is expected to be announced later this year.

If Dragonfly is selected, it will likely launch in 2025 and land on Titan in 2034, mission team members have said.

Bridenstine isn't the only NASA official to express optimism about the alien-life hunt recently. In 2015, Ellen Stofan, the agency's chief scientist at the time, predicted that NASA would find signs of E.T. by 2025 and definitive evidence within 20 to 30 years.