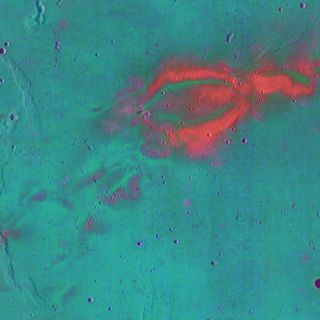 So, think about adding a squirt of milk into a cup of steaming coffee and give it a whisk. Eddies of cream go swirling around the cup.

On the moon, this pattern is called a "lunar swirl" — bright features that can be tens of miles across and appear as isolated individuals or in extensive groups or belts. Lunar swirls are found where the lunar crust is magnetized, although not all magnetic areas have swirls. Furthermore, the bright areas in the swirls look to be less weathered than their surroundings.

Related: How the Moon Evolved: A Photo Timeline

Those observations have led to several hypotheses about how lunar swirls are formed and several ideas about the separate question of the origin of the magnetized crust.

Could these tattoo-like oddities help sustain a human presence on the moon?

A recent NASA Artemis presentation on lunar science that should be performed by 2024, in the category of non-polar landers and rovers, specifically noted: "Explore scientifically valuable terrains not investigated by Apollo, including landing at a lunar swirl and making the first surface magnetic measurement."

(Artemis is NASA's program of crewed lunar exploration, which aims to put astronauts down on the moon by 2024 and establish a sustainable human presence there by 2028.)

Scientists looking into the magnetic fields suggest that they could have formed from processes related to impacts — either by a comet coma, or plasma effects arising from the formation of a large impact basin.

Another possibility is that the magnetic fields that have been sensed from orbiting spacecraft originate in subsurface bodies of rock that were magnetized by an ancient global lunar field generated in the moon's core (a "dynamo" that has since died out).

There is also controversy about the relationship between the magnetic regions (called "magnetic anomalies") and the high-reflectance swirly markings.

Perhaps when fine dust particles are lofted by micrometeoroid impacts or electrostatic forces, an existing magnetic field over the swirls sorts them according to their susceptibility to magnetism, forming light and dark patterns with different compositions.

The comet-impact hypothesis predicts that each swirl formed at the same time as its associated magnetic anomaly. Gas and dust from the comet coma may have scoured the lunar surface, exposing fresher regolith from below the upper weathered layer.

Alternatively, since particles in the solar wind (electrons and ions) are electrically charged, they can be deflected by the magnetic fields. So, it's possible that the magnetic field shields the surface from weathering by the solar wind, attenuating the soil-darkening process that normally causes bright crater rays to fade away with time.

If the solar wind shielding explanation is correct, one could reasonably ask: Might the swirls offer electrostatic/magnetic field radiation protection for future crews on the moon?

Observations of lunar swirls by NASA's Lunar Reconnaissance Orbiter appear to provide support for the magnetic shielding hypothesis, but don't rule out the other theories.

"A lot of these questions you could answer by a surface mission to one of those areas," said David Blewett of the Planetary Exploration Group at the Johns Hopkins University Applied Physics Laboratory (APL) in Laurel, Maryland.

"I'd like to see a rover drive around and find out how much solar wind is getting to the lunar surface and investigate the effects that causes the soil and swirls to darken with time. What's the origin of those magnetic anomalies? The moon doesn't have a global magnetic field. Yet it has these sections of magnetized crustal rock. That's interesting when considering an ancient lunar dynamo…if there was one," Blewett told Space.com.

Blewett said that there are open questions about the hydration of the lunar surface and how it does — or does not — vary with time of day. Remote-sensing data from moon orbiters have revealed spectral features consistent with the presence of lunar hydroxyl (OH) and water (H2O) on the moon's surface.

"It could be that magnetic focusing of the solar wind associated with swirls could replenish the OH/H2O every month," Blewett said.

The in-situ resource utilization possibility that comes to mind at lunar magnetic anomalies/swirls, Blewett said, has to do with solar-wind implantation.

"It's pretty clear that the local magnetic fields are shielding the surface from solar-wind protons — these are the bright parts of the swirl. But it could be that the fields are directing extra ions onto the surface in some places, corresponding to the 'dark lanes' within the swirls," Blewett suggested. "Think of it as rain rolling off an umbrella: You stay dry, but a ring around you gets extra wet from the runoff from the umbrella."

Since there seem to be links between the implantation of solar wind protons and production of hydration (either OH or H2O), "it could be that at a magnetic anomaly we could find small areas with higher-than-normal abundances of OH/H2O," Blewett said.

Karl Hibbitts, a planetary scientist also at APL, agreed that the bright parts of the swirls have fewer volatiles than non-shielded areas. That's due to lower flux of protons, he said, and subsequently less so-called "solar wind OH," which is actually OH formed in silicates and/or oxides from implanted solar wind protons.

"I do consider swirls scientifically interesting, but the best places to explore for volatiles remain at the poles," Hibbitts observed. "The colder, the better for retaining all volatiles."

Given the science of swirls — and what we do and don't know about them — just what utility they offer for moon explorers, be it for shielding or resource-extraction purposes, is up for discussion.

Because the mini-magnetospheres above the swirls protect the surface from the solar wind and so might also protect against cosmic rays, "they might be preferential locations for future habitats," said Ian Crawford, Professor of Planetary Science and Astrobiology at Birkbeck, University of London.

However, Crawford said he's skeptical that these fields will be strong enough to make a difference. "Surface observations of the radiation environment are desirable to check this," he told Space.com.

The solar wind that doesn't reach the swirls, Crawford said, is presumably deflected around it, "so the regolith around the base of the mini-magnetospheres might be somewhat more enriched in solar wind-implanted volatiles than the lunar regolith average. Again, I think surface measurements will be needed to confirm this."

In the end, swirls are aptly named; there remain a swirl of questions as to their nature and possible use in upcoming human sojourns to the moon.

"We really need a lunar rover to go explore a magnetic anomaly/swirl. They are marvelous natural laboratories that could be used to study a wide range of important phenomena in planetary science: generation of magnetic fields, space weathering, dust behavior and interaction of the solar wind with magnetic fields, among others," APL's Blewett pointed out.

"In many ways," Blewett concluded, "right now is almost a more exciting time in lunar science than the Apollo days. We know so much more, and we have discovered so many interesting things about the moon — the cornerstone body of planetary science."