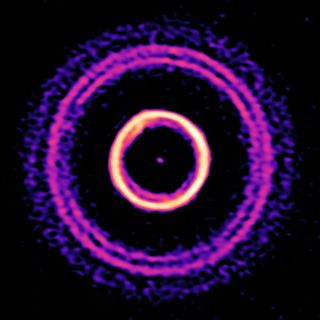 ALMA observation of the young star system HD 169142, which shows an outer region composed of thin rings and a double gap. These fine structures had never been seen before in the outer parts of a disk with a deep chasm that severs the protoplanetary environment into inner and outer regions.
(Image: © N. Lira – ALMA (ESO/NAOJ/NRAO); S. Pérez – USACH/UChile)

A newborn exoplanet is apparently on the move.

Astronomers have spotted intricate ring structures in the outer portion of the disk of dust and gas that surrounds the young star HD 169142, which lies about 370 light-years from Earth in the constellation Sagittarius.

These rings were likely sculpted by a migrating baby planet about 10 times more massive than Earth, the researchers report in a new study.

The scientists studied HD 169142 using the Atacama Large Millimeter/submillimeter Array (ALMA), a network of radio telescopes in northern Chile. ALMA has observed many newborn star systems over the past few years, finding gaps and rings in the protoplanetary disks of pretty much all of them. Such structures are carved out by the planets coalescing there, most astronomers believe.

So it's no great shock that ALMA spotted gaps in the disk around HD 169142, a star about 1.7 times more massive than our sun. But the details were surprising. In addition to a big inner gap likely associated with one or more giant protoplanets, HD 169142's disk sports thin rings and gaps in its outer reaches — a region where wide, smooth rings tend to prevail, researchers said.

The team performed computer simulations to understand the structures' possible origin. This work pegged the likely culprit as a mini-Neptune that formed about 69 astronomical units (AU) from the parent star, then moved inward to about 64 AU. (One AU is the average Earth-sun distance — about 93 million miles, or 150 million kilometers.)

"Planetary migration naturally explains the distinct mutual separations between the narrow rings," the researchers wrote in the new paper, which was published online today (June 14) in The Astronomical Journal.

"Here, one small planet interacting with tiny dust particles can reproduce these rings in isolation, revealing its properties in an indirect way," study lead author Sebastian Pérez, of the University of Santiago in Chile, added in a statement. "The community has made great progress on interpreting these sharp rings seen in young planetary systems. This one and other similar experiments open new possibilities of characterization of superyoung extrasolar planets."