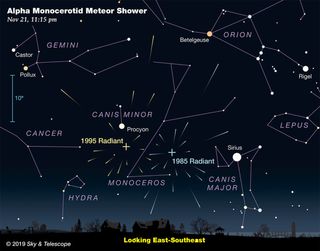 Researchers have predicted that tonight (Nov. 21), an ultrabright meteor outburst might speckle the sky with a dazzling performance. But a NASA scientist is pretty sure that you won't see anything spectacular in the sky tonight.

Researchers Peter Jenniskens and Esko Lyytinen have predicted that, beginning at around 11:50 pm EST (0350 GMT) tonight, the rate of meteors falling per hour in the night sky could be as high as 400 to 1,000. But, while people are getting excited about the prediction, Bill Cooke, who leads NASA's Meteoroid Environment Office, said in a recent blog post,  "I now think there is a pretty good chance there may be no outburst at all. And even if there is, it won’t be as impressive as many think."

The meteor spectacle that Jenniskens and Lyytinen predict will dazzle tonight is an outburst of the alpha Monocerotid meteor shower (AMOs). According to the two researchers, based on the history of this meteor shower, which resulted in outbursts in years that included 1925, 1935 and 1995, the AMOs are created by a long period comet that orbits the sun every 500 years, Cooke explained in his post. If this is right, Earth will pass through the center of the meteor stream, resulting in an eventful shower in the sky.

"However," Cooke said, "the intensity of the outburst is very dependent on the size of the parent comet’s orbit. If it is much smaller, or larger, the distance from the stream center will be bigger, and there will not be any sky show, just the normal AMOs, puttering along with their normal rate of 3 or so meteors per hour. And since we have not yet discovered this mysterious parent comet, who knows how close the estimate of the orbit is to the actual?"

According to some old research that Cooke dug up on the 1925 and 1935 outbursts, they were short and had "a fair number of meteors," he said in his blog. Based on these old observations, it seems that there could have been about 100 meteors over 40 minutes in earlier instances of this meteor outburst. While that rate is still consistent with a meteor shower, it's not nearly the spectacular sight that the predicted 1,000 meteors per hour would be.

Cooke goes on, detailing the observations made during AMO outbursts within the last century, and how past observations might indicate that tonight's shower might be small. He added that, for skywatchers on the west coast, they won't see the meteor outburst, even if their skies are clear and their friends on the East coast are getting a cosmic show.

Now, as you read through the meteor deep-dive he does in his blog and try to decide how likely you think tonight's cosmic event might be, remember that Cooke thinks that, whatever appears in the sky tonight, it will certainly still be worth it to go outside to watch.

"Even if there is no outburst, it doesn’t hurt to get out under the stars for a bit," he said. The possibility of a shower is "a good reason to step outside Thursday night, because the cool thing is that if an outburst does occur, we will have a pretty good idea of the orbit of this comet – not from observing the comet with telescopes, but by counting its debris as they burn up in our atmosphere."