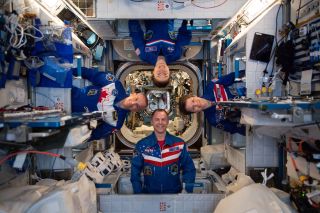 It's all work and no play for American astronauts in space this Memorial Day.
(Image: © NASA)

As Americans around the world gear up for ceremonies and cookouts to celebrate Memorial Day today (May 26), astronauts in space are hard at work. But they still took time to honor the men and women of the U.S. military this holiday.

"...and some gave all. For them, and for their families who continue to give every day, we remember," NASA astronaut Anne McClain, a lieutenant colonel in the U.S. Army, wrote on Twitter to mark the holiday from the International Space Station.

The station's six-person Expedition 59 crew, which includes McClain and two other Americans, doesn't actually get a day off for the holiday, but they may get some free time later to make up for it, Space.com has learned.

...and some gave all. For them, and for their families who continue to give every day, we remember. pic.twitter.com/rKty3R8P18May 27, 2019

"They have a full work day on Memorial Day but that means they'll get a day off somewhere down the road to compensate," NASA spokesperson Dan Huot at the agency's Johnson Space Center in Houston said in an email. That also means there are flight control teams in mission control centers around the world watching over the crew, just like they've done every day since the first crew took up residence on the station in 2000.

Huot said the station's current Expedition 59 crew has been hard at work conducting scientific research since the arrival of a SpaceX Dragon cargo ship earlier this month, and occasionally crews can miss holidays due to workload demands. But that doesn't mean astronauts are out of touch.

The space station crew has regular access to an internet protocol phone to call of video conference with friends and family during free time.

Memorial Day is traditionally a time for Americans to honor the service and sacrifice of its military service members, and there are two U.S. military officers on the space station right now.

McClain has been living on the station since December. This is her first space mission since joining NASA's astronaut corps in 2013.

Astronaut Nick Hague, meanwhile, is a colonel in the U.S. Air Force and is on his first spaceflight like McClain. Hague also joined NASA in 2013 and was originally scheduled to fly to the station last October, but the Russian Soyuz rocket he launched on experienced an emergency abort after an anomaly. He ultimately launched to the station in March 2019.

Engineer-astronaut Christina Koch rounds out the U.S. crew on the International Space Station and launched to the station in March with Hague. Koch's mission will be longer than that of her fellow American colleagues, as she now plans to spend about a year in space to help scientists better understand long-duration spaceflight.

Two Russian cosmonauts and one Canadian astronaut make up the rest of the station's Expedition 59 crew. They are: Canadian spaceflyer David Saint-Jacques and cosmonauts Alexey Ovchinin and Oleg Kononenko. Kononenko commands the station crew.