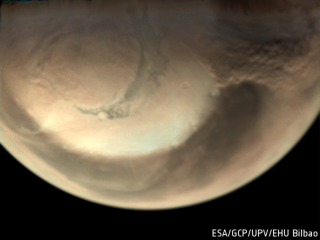 A dust storm underway at the edge of the north polar ice cap of Mars, as seen by Europe's Mars Express orbiter on May 29, 2019.
(Image: © ESA/GCP/UPV/EHU Bilbao)

It's dust-storm season in northern Mars, as a series of newly released photos makes very clear.

"It is currently spring in the northern hemisphere of Mars, and water-ice clouds and small dust-lifting events are frequently observed along the edge of the seasonally retreating [polar] ice cap," ESA officials wrote Thursday (July 4) in a statement accompanying the photos.

Mars Express "observed at least eight different storms at the edge of the ice cap between 22 May and 10 June, which formed and dissipated very quickly, between one and three days," the officials added.

Such storms aren't always so short-lived and limited in reach. Last summer, a Martian dust storm flared up near the equator and soon went global, blanketing the entire Red Planet for weeks. The thick dust pall deprived NASA's solar-powered Opportunity rover of sunlight, bringing an end to the robot's long and accomplished mission.

Some of the newly released Mars Express imagery shows the recent regional storms heading south, from the ice cap's margin toward the huge volcanoes Olympus Mons and Elysium Mons.

When the storms reached these volcanoes, clouds in the area "that had previously been developing started to evaporate as a result of the air mass being heated by the influx of dust," ESA officials wrote.

Mars Express arrived in orbit in December 2003, just a few weeks before Opportunity and its twin, Spirit, hit the red dirt.