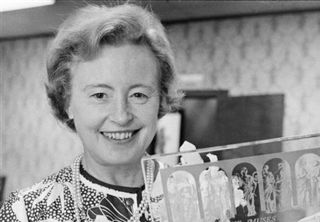 Dr. Burbidge is presented with the "Woman of the Year' award in 1976, while professor at UC San Diego.
(Image: © Annie Gracy/Wikipedia, CC BY-SA)

As Carl Sagan famously said: "The cosmos is within us. We are made of star-stuff." That's not just a poetic bromide – there's solid scientific proof that the calcium in our bones, the iron in our blood and the copper in our hair were all made in furnaces within stars. Astronomer Margaret Burbidge laid out the evidence for this in a 100-page paper in 1957. Her work, alongside Geoffrey Burbidge, William Fowler and Fred Hoyle, forever changed the way humans think of themselves and their place in the universe.

Apart from her groundbreaking work on the origin of elements, Burbidge is interested in galaxies, extremely distant and luminous cosmic objects that harbour supermassive black holes called quasars, and in the theory of a steady-state universe, an alternative to the Big Bang theory. Her life and work has influenced generations of astronomers and left an impressive legacy of discoveries. She achieved all this at a time when women often found their path to a career in science barred.

Burbidge recently turned 100. This is a great opportunity for generations of scientists who have been influenced by her, either personally or through her work, to celebrate the life of this truly stellar astronomer.

A century in science

Eleanor Margaret Peachey was born on August 12 1919, in Davenport, Greater Manchester, but spent her early years in London. She first saw the starry sky at the age of four, on the boat to France with her mother. Science ran in her family – both her parents were chemists and her father had a penchant for inventing.

James Jeans, another prolific astronomer, was also a distant relative. Although they never met, she got his popular science books as gifts for Christmas. At 12, already fascinated by big numbers, she was heavily immersed in reading them.

During World War II, she studied astronomy at University College London. There, she met Geoffrey Burbidge, who she married. Together, they embarked on a lifelong adventure in science.

At that time she taught a practical class with the telescope and had a chance encounter with Arthur C. Clarke, who'd later become the famous science fiction writer and futurist. Young Clarke was an enthusiastic student who wanted to learn "everything to do with the planets and interplanetary travel". Apparently he was so keen observing the stars that he almost knocked another student off the roof one night.

Burbidge always had a stern determination to overcome obstacles. Her observing logbook in 1944 shows how she unflinchingly recentered the stars in the field of view of the telescope each time bombs exploding nearby jolted her eyepiece.

She found the strength to overcome challenges through her love of astronomy. Seeing a spiral galaxy for the first time on a photographic plate left her euphoric. She recalled:

I felt it was almost sinful to be enjoying astronomy so much, now that it was my job and the source of my livelihood.

#OnThisDay 1963: Warner Prize-winning husband and wife astrophysicists, Margaret and Geoffrey Burbidge, discussed their work, the Universe, the space program and God, on The Cosmologists. pic.twitter.com/Yw0XUf3B4eMarch 12, 2019

But the world was still an unkind place for gifted women scientists. Burbidge first encountered gender-based discrimination when she applied for a fellowship at the Carnegie Observatories, in the US. A letter from the director informed her curtly that such fellowships were restricted to men. Later, she was barred from observing the sky at Mount Wilson Observatory in California.

Burbidge wasn't deterred and, in her usual manner, whenever she met "with a blockage," she "found a way around it". She gained access to Mount Wilson Observatory posing as Geoff's assistant. She had to conceal her pregnancy while climbing up the mountain even on hot, sweltering days, swaddled in a coat.

She often used her professional clout to speak on behalf of other women in science. She declined the Annie Jump Cannon award in 1971 – a prize that honours the research achievements of women astronomers. She argued that gender-based awards keep women from fair recognition. This act of rebellion spurred the creation of the Committee on the Status of Women in Astronomy, which encourages women into the field and promotes their work within it.

Today, scientists are confronted with many problems, from tackling the still-existing inequalities within their own profession, to solving all kinds of humanitarian crises. Margaret Burbidge offers a shining example of how one can achieve a breakthrough even in difficult times. While contemplating the destructive forces in the world in 1983, Margaret confessed her unwavering hope for the future.

I believe we have the capacity to foresee and forestall. Scientists of all nations are in a position […] to improve the lives of all humans.