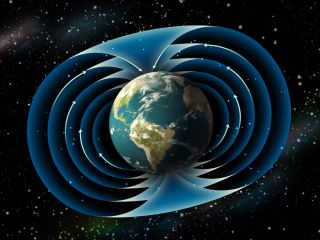 The last reversal of Earth's magnetic poles happened long before humans could record it, but research on the flow of ancient lava has helped scientists estimate the duration of this strange phenomenon.

A team of researchers used volcanic records to study Earth's last magnetic-field reversal, which occurred about 780,000 years ago. They found that this flip may have taken much longer than researchers previously thought, the scientists reported in a new study.

Earth's magnetic field has flipped dozens of times in the past 2.5 million years, with north becoming south and vice versa. Scientists know the last reversal took place during the Stone Age, but they have little information about the duration of this phenomenon and when the next "flip" might occur.

In the new study, the researchers relied on flow sequences of lava that erupted close to or during the last reversal, to measure its duration. Using this method, they estimated that the reversal lasted 22,000 years — much longer than the previous estimates of 1,000 to 10,000 years.

"We found that the last reversal was more complex, and initiated within the Earth's outer core earlier, than previously thought," lead study author Bradley Singer, a professor of geoscience at the University of Wisconsin-Madison, told Space.com.

"Such records are indeed extremely rare, and I am one of very few people who date them," Singer said.

Since then, he's made it his career-long goal to better explain the timing of magnetic-field reversals.

The reversals take place when iron molecules in Earth's spinning outer core start going in the opposite direction as other iron molecules around them. As their numbers grow, these molecules offset the magnetic field in Earth's core. (If this were to happen today, it would render compasses useless as the needle would swing from pointing towards the north pole to pointing to the south.)

During this process, Earth's magnetic field, which protects the planet from hot sun particles and solar radiation, becomes weaker.

"This kind of duration would mean the shielding of the Earth from solar radiation would be very complex and, on average, less effective over a longer time period," John Tarduno, a professor of geophysics at the University of Rochester who was not involved in the study, told Space.com. "The actual effects of that are still debatable, and they're not as tragic or as extreme as someone might suggest, but there still can be important effects."

Some of these effects, Singer suggested, could include genetic mutations or additional stress on certain animal or plant species, or possible extinctions, due to increased exposure to harmful ultraviolet light from the sun. An increase in particles from the sun entering Earth's atmosphere could also cause disruption to satellites and other communication systems, like radio and GPS, he added.

Recent reports of the magnetic field jolting from the Canadian Arctic toward Siberia have sparked debate over whether the next magnetic-field reversal is imminent and what kind of impact that would have on life on Earth.

However, Singer dismissed these claims. "There is little evidence that this current decrease in field strength, or the rapid shift in position of the north pole, reflect behavior that portends a polarity reversal is imminent during the next 2,000 years," he said.

Using the data gathered from lava flows, geologists can learn a lot more about magnetic-field reversals. "Even though volcanic records are not complete records, they're still the best kind of records we have of recording a given time and place," Tarduno said. "Higher accuracy in the age dating, and being able to get more detailed records [of the reversals]...will give the community a lot to think about," he added.

The paper was published on August 7 in Science Advances.