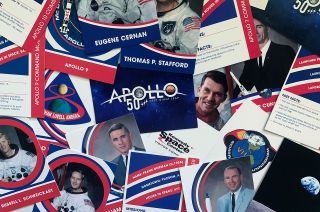 For guests visiting NASA's Kennedy Space Center this weekend, Apollo history is in the cards.

Kennedy Space Center Visitor Complex in Florida will mark the 50th anniversary of the launch of NASA's Apollo 10 mission on Saturday (May 18) by handing out free collectible trading card sets to the public. The giveaway continues a program celebrating each of the Apollo missions on their half-century milestones.

"We wanted to mark each mission in a way that was fun and interesting, but also had an educational component. We were aware that maybe not every person who visits Kennedy Space Center Visitor Complex is familiar with the details behind the missions," said Rebecca Shireman, public relations and communications manager at Kennedy Space Center Visitor Complex.

Related: NASA Centers to Visit for an Out of This World Vacation

"Each card set is similar to what people may know from baseball trading cards, in their size and as a reference. The cards display some facts about the mission and each astronaut who was part of that crew," Shireman told collectSPACE.com.

As guests may learn from the trading cards given out on Saturday, the Apollo 10 mission lifted off on May 18, 1969 as the "dress rehearsal" for the first moon landing. The eight-day flight carried out all of the aspects of a landing mission, with the exception of the landing itself, aboard the command module "Charlie Brown" and lunar module "Snoopy."

The Apollo 10 crew of commander Thomas Stafford, command module pilot John Young and lunar module pilot Eugene Cernan were the first and only Apollo astronauts to leave Earth from Launch Complex 39B, and they set the Guinness World Record for the "highest speed attained by a crewed vehicle," accelerating to 24,791 miles per hour (39,897 kilometers per hour) during their return to Earth.

And, as one of the cards in the five-card set reveals, they were also the "first crew to shave in space."

"There's one card for each astronaut, so Cernan, Stafford and Young, and each of those cards contain fun facts — we're calling them 'fast facts' — about the astronaut, their hometown and their hours in space, and then what other missions they were a part of," described Shireman. "Another card is about the mission itself. It has the crew patch on the front and then on its back, when the mission was launched, where it launched from and when it landed, as well as facts about the mission itself."

"We tried to come up with interesting facts that maybe the everyday guest at Kennedy Space Center Visitor Complex wouldn't be familiar with," Shireman said.

"We'll have a special expanded edition for that mission," explained Shireman. "Most of the card sets have been five cards, so we'll expand that for Apollo 11 and we'll also probably add some artistic elements as well to elevate it."

The cards are only available on the day of the 50th anniversary of the mission's launch. Those wanting their own set of Apollo 10 cards on Saturday, or future sets going forward, should visit Guest Services near the entrance to Kennedy Space Center Visitor Complex, where the cards will be distributed. Daily admission to the Visitor Complex is required and the cards are only available as supplies last.