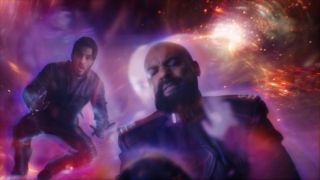 Colin Salmon, the actor who plays General Zod on the Syfy series "Krypton," wasn't told that his character would take over the planet by the end of the first season. But the British actor thinks that story arc makes sense for his character's motivation on the show.

"He came here to affect change and stop Brainiac. He did what he thought was best for Krypton," Salmon said. "He was so single-minded that he wasn't going to let anything stop him. So I think he ended up in the right place."

"Krypton," which is set to premiere its second season on June 12, takes place two generations before Superman, telling the story of the families on Krypton who raised the heroes and villains featured in the comic books.

During Season 1, viewers learned that Salmon's character was actually the General Zod — a Superman-era supervillain — who had traveled back through time to save Krypton.

But in doing so, he would prevent the birth of Superman.

The central conflict of "Krypton" Season 1 was Zod's quest to stop Brainiac and save his own planet. Superman's grandfather, Seg-El, and another time-traveler named Adam Strange fought against him with all the drama and space-traveling you might expect from a politically charged story on Planet Krypton.

"We're able to create the Old Testament to that story [of Superman]," Salmon said. "We get to explore the politics that lead to that moment, and I think now, being in it for the second season, and seeing how we are moving it forward and changing things, it's really getting interesting."

At the end of Season 1, Zod apparently succeeded in saving Krypton and taking over everything, causing a new timeline to be created, with Zod as leader and conqueror.

"This season, Zod doesn't have to acquiesce or pretend to be anything he isn't," Salmon said. "You'll get full-on, overdrive, overlord Zod. He sees Krypton as the universal imperial force, because of his experiences in the Phantom Zone and his travels through time."

"If they will follow him, he will lead us to universal domination," Salmon added. "He's a different animal this season. He's untethered."

Salmon said that he "trained like a beast" for Season 2 because Zod has even more fight scenes. And while Season 1 focused on the mental and psychological side of Zod, "this season, you see a man fighting to redress that history, really," Salmon said. "And I think that's what's driving him."

Salmon, a beloved actor in the U.K., is well-known for his distinctive voice, which he used famously in Season 1 to deliver the iconic line: "Kneel to Zod."

"He's great fun to play," Salmon said with a laugh. "There's a wonderful scene in Season 2 where somebody doesn't do what I please, and it's very Nero-like what happens to him. But then you'll see his relationship with [Zod's grandmother] Lyta explored as well. It's quite emotional."

Last season ended with a few surprises for viewers, including the release of the creature Doomsday. And the second season trailer revealed a new character, Lobo — a space-traveling Czarnian with an attitude who's pulled straight from the comic books.

"He's off the chain," Salmon said of Lobo's character. "And Doomsday — it was really moving the day that I saw him on set. It's such a powerful genesis for those characters. And to see that in play, it really was quite moving."

This season also sees the creation of the New Krypton. "It's been designed and built, and it has a real nod to Mr. Donner," Salmon said. "You'll feel the shape of it. You'll feel this angular, amazing architecture that appeals to Zod."

The actor admits he wasn't a comic-book reader when he was young, but he has a close friend who gives him feedback on the role and the direction the series is going.

Now that Zod is in charge, Salmon said Superman comic book readers will recognize him even more than during the first season.

"He's less humble," Salmon said. "Those who know Zod from the comics, I think they now see the Zod they know. But it was still beautifully written for the show. The writers have still managed to keep that strange debate where your heart goes to him a bit, because you understand his argument. It's a quite extraordinary argument. I don't even know if I would say he's wrong, but does he have to go about it in the way he does? If you cross the line and kill people, don't you become the problem?"

Salmon said he's often asked whether he's playing a good guy or a bad guy. "I'll often say things like, well, I'm a bad guy who does good things … or I'm a good guy who does bad things," he said. "I think that's quite important, really, because otherwise, it's just black and white and there's no complexity."