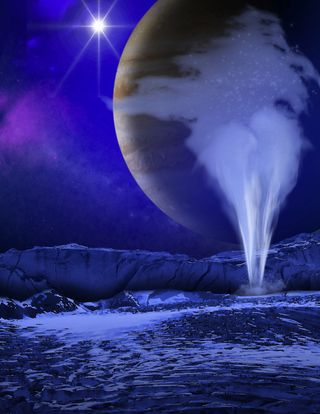 The Jupiter moon Europa's elusive and enigmatic water-vapor plumes do indeed seem to be real.

NASA's Hubble Space Telescope has spotted indirect evidence of such plumes emanating from Europa, which is thought to harbor a huge, salty ocean beneath its ice shell. And researchers have now detected one such plume's water vapor directly for the first time, a new study reports.

"Essential chemical elements (carbon, hydrogen, oxygen, nitrogen, phosphorus and sulfur) and sources of energy, two of three requirements for life, are found all over the solar system. But the third — liquid water — is somewhat hard to find beyond Earth," study lead author Lucas Paganini, a planetary scientist at NASA's Goddard Space Flight Center in Greenbelt, Maryland, and American University in Washington, D.C., said in a statement.

"While scientists have not yet detected liquid water directly, we've found the next best thing: water in vapor form," Paganini added.

Related: Possible Water Plumes on Europa: The Discovery in Images

Paganini and his colleagues used the W.M. Keck Observatory in Hawaii to study the 1,900-mile-wide (3,100 kilometers) Europa, which astrobiologists regard as one of the solar system's best bets to host alien life.

The researchers observed Europa for 17 nights, from February 2016 through May 2017. On one of those nights — April 26, 2016 — they got a strong signal of water vapor, in the form of a characteristic wavelength of emitted infrared light.

And there was quite a bit of the stuff — about 2,300 tons (2,095 metric tons), according to the researchers' calculations. That's almost enough to fill an Olympic-size swimming pool (which contains about 2,750 tons, or 2,500 metric tons, of water).

The researchers think the source of this water is a plume, which could be coming from the buried ocean or from a reservoir of melted ice within Europa's shell. For starters, the observed volume is much higher than what is predicted to result from "exogenic" processes, such as the stripping of water molecules from Europa's surface by Jupiter's powerful radiation belts. And such stripping would likely occur fairly regularly, or at least often enough to be noted more than one night out of 17, Paganini and his team wrote in the new paper, which was published online today (Nov. 18) in the journal Nature Astronomy.

Multiple lines of evidence now point to the existence of plumes on Europa. For example, in addition to the new results and Hubble's detection of atomic hydrogen and oxygen (which presumably came from water molecules split apart by radiation), NASA's Galileo Jupiter probe measured a big increase in the density of plasma, or ionized gas, during a Europa flyby in 1997.

And it's becoming increasingly clear that Europa's plumes are sporadic. In that regard, they're very different from the constant plume wafting from the south pole of Saturn's icy, ocean-harboring moon Enceladus, which is generated by more than 100 powerful geysers that are always on.

"For me, the interesting thing about this work is not only the first direct detection of water above Europa, but also the lack thereof within the limits of our detection method," Paganini said.

Plumes like those emanating from Enceladus and Europa are very exciting to astrobiologists, because they're sending "free samples" from potentially habitable environments out into space for potential snagging by robotic probes. And there's a possibility that a NASA spacecraft could soon do just that, if everything works out just right.

NASA is developing a mission called Europa Clipper, which is scheduled to launch in the mid-2020s. Clipper will orbit Jupiter but study Europa up close on dozens of flybys, characterizing the moon and its ocean and hunting for spots where a potential life-hunting lander could touch down in the future. Clipper could end up zooming through the plume on one or more of those flybys, if mission team members learn enough about the feature in the coming years —  or if they just get really lucky.