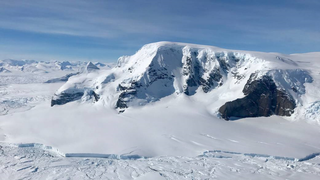 Despite its thick ice sheet, Antarctica is technically a desert.
(Image: © Joe MacGregor/NASA)

By examining Antarctic snow, researchers have discovered, for the first time, interstellar dust that recently fell to Earth, a new study finds.

These findings may shed light on the mysterious interstellar clouds the solar system flies through regularly, scientists said. Tons of extraterrestrial dust — created by passing comets, asteroid collisions and exploding stars — falls on Earth daily. But scientists may not find it until long after it has fallen, and so lack details about the solar system’s recent interactions with its surroundings.

By contrast, this new study analyzes relatively fresh interstellar dust, and the findings may reveal insight into mysterious interstellar clouds and their relationship with our solar system.

"Scientists might be able to use our results to figure out how the solar neighborhood was shaped," study lead author Dominik Knoll, an experimental nuclear physicist at the Australian National University in Canberra, told Space.com. "We know something about distant galaxies and stars and a lot about our solar system, but the nearby surroundings of our solar system need more investigation."

To look for potentially pristine samples of interstellar dust, scientists collected about 1,100 lbs. (500 kilograms) of Antarctic snow that was less than 20 years old. It was collected several hundred miles from the coast of the frozen continent, near Germany's Kohnen Station.

To identify the snow's components, the researchers brought it to Munich, melted it, filtered out the solids, incinerated the residue and analyzed the pattern of light it gave off. They discovered the presence of two rare, mildly radioactive isotopes: iron-60 and manganese-53. (Isotopes of an element vary in how many neutrons they possess in their nuclei; so for example, the most naturally abundant iron isotope, iron-56, has 30 neutrons, whereas iron-60 has 34 neutrons.)

According to the researchers, the most likely source of the iron-60 was a supernova, a powerful explosion from a gigantic dying star that is bright enough to briefly outshine all of the other stars in its host galaxy. Other natural ways of creating iron-60 produce only up to one-tenth as much. However, iron-60 and manganese-53 also can be produced when atom fragments called cosmic rays strike interplanetary dust. Nonetheless, the researchers found a greater ratio of iron-60 to manganese-53 than they would have expected from this mechanism.

The researchers also investigated whether the iron-60 came as fallout from nuclear weapons or power plants. However, they found that the production of iron-60 and manganese-53 from these sources should be negligible.

So the scientists concluded that these radioactive isotopes were most likely forged in a nearby supernova that went on to seed interstellar clouds of gas and dust. In the study, the researchers suggested that, as the solar system passes through such clouds, this dust rains down on Earth's surface.

Future examination of interstellar dust in older snow and ice could shed light on the origins and structure of nearby interstellar clouds and the history of their interactions with the solar system, the researchers said.

The scientists detailed their findings online Aug. 12 in the journal Physical Review Letters.