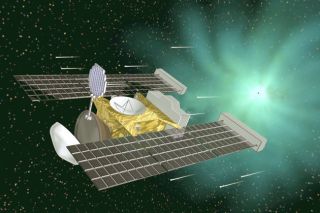 In January 2006, a conical capsule carrying the first samples of a comet and the first pristine traces of interstellar dust ever collected landed in the Utah desert. The capsule had been dropped from NASA's Stardust spacecraft, which continued its voyage through space and became the first mission to visit two comets.

Launched in 1999, Stardust visited an asteroid before making a close brush with Comet Wild 2 (pronounced "vilt 2" after the name of its Swiss discoverer Paul Wild), then returned to Earth to deposit the samples. As part of its extended mission, the box-shaped craft visited Comet Tempel 1. When the mission ended, in March 2011, the spacecraft had traveled nearly 5.7 billion miles (9.1 billion kilometers) over the course of nearly 12 years.

Although the mission has come to a close, researchers are still hunting down the dust particles embedded in material carried by the capsule that returned to Earth more than a decade ago.

"I anticipate that people will be asking for and working on these samples for decades to come," Scott Sanford, a scientist from NASA's Ames Research Center in Mountain View, California, said in a statement. He referred to samples from Stardust as "a gift that keeps on giving."

The Stardust was a boxy craft that carried two solar arrays, along with a 101-lb. (46 kilograms) sample-return capsule that was dropped into Earth's atmosphere, carrying samples of cometary and interstellar dust. The spaceship carried two dedicated science instruments and several engineering instruments required for spacecraft operation that also collected scientific data:

The crown jewel of Stardust's instruments was the sample-gathering aerogel. The product is a silicon-based solid with a porous, sponge-like structure and consists mostly of empty space. Because the particles that Stardust aimed to sample were traveling at up to six times the speed of a rifle bullet, a high-speed capture in a conventional collector could alter the particles' shape and chemical composition. But when the high-speed particles hit aerogel, they were captured with minimal heating or chemical alteration.

"Capturing the particles in aerogel was a little bit like collecting BBs by shooting them into Styrofoam," Sanford said.

Each particle created a carrot-shaped track up to 200 times the particle's length in the aerogel, allowing scientists to trace the particles' paths through the mostly transparent material.

Stardust's primary science objectives included making a flyby of Wild 2 at a velocity low enough that samples could be collected for return and interstellar dust particles could be collected. This would also allow the return of as many high-resolution images as possible of the comet's nucleus and the surrounding shell of gas, or coma.

On its way to Wild 2, Stardust collected interstellar dust material older than the solar system. In 2003, the probe flew within 2,050 miles (3,300 km) of the asteroid 5535 Annefrank. The mission team used the tiny asteroid as a preliminary run and an attempt to improve Stardust’s flyby accuracy while collecting images of Annefrank.

Stardust entered the coma of Wild 2 on Dec. 31, 2003, and made its closest approach on Jan. 2, 2004, passing within 155 miles (250 km) of the comet. At that point, the spacecraft was 1.85 times the Earth-sun distance from the sun. The sample collector was extended on Dec. 24, and after collecting all the material possible, it was sealed in the sample vault of the re-entry capsule only 6 hours after the flyby. Stardust captured 72 high-resolution images of the comet's nucleus as the object buzzed Wild 2. [Photos: NASA's Stardust Mission Brings Cosmic Dust to Earth]

In January 2006, Stardust dropped its conical capsule into the Earth's atmosphere. The capsule landed at the U.S. Air Force Test and Training Range in the Utah desert. Within two days, the capsule was transferred to the Johnson Space Center in Houston, where researchers began the long hunt through aerogel for signs of the tiny particles.

Back in space, Stardust was placed into hibernation until it was funded for an extended mission called the New Exploration of Tempel 1 (NExT). A year earlier, in 2005, NASA's Deep Impact spacecraft observed Tempel 1 and crashed a probe into it. The Stardust-NExT mission returned to Tempel 1 to continue mapping the comet and examine how the impact crater had changed.

When Stardust flew by its second target, on Feb. 14, 2011, the probe became the first spacecraft to visit two comets, while Comet Tempel 1 became the first comet visited by two space probes. Stardust's images revealed that much of the material blown out of the nucleus by Deep Impact had fallen back into the crater, suggesting that the heart of the comet wasn’t as tightly held together as previously believed.

On Mar. 25, 2011, Stardust's extended mission ended. The spacecraft continues to orbit the sun, and NASA predicts that the probe will never get closer than 1.7 million miles (2.7 million km) to Earth's orbit.

Like most comets, Wild 2 is a fossil of planetary formation. For most of its life, it orbited between Jupiter and Uranus, but a brush with Jupiter in 1974 moved the comet to an orbit closer to the sun. By the time Stardust visited the comet, Wild 2 had made only five close encounters with the sun, which meant that the comet was in roughly the same condition as when it was formed with the solar system, some 4.5 billion years ago.

Stardust's samples helped researchers discover a new class of organics, captured by the dust particles, that was more primitive than those spotted in meteorites. Scientists also found irregular particles known as calcium-aluminum-rich inclusions (CAIs). CAIs are the oldest solar system materials and are composed of exotic compounds that form at very high temperatures.

The team also discovered a handful of interstellar particles — the first ever collected in space and returned to Earth for study. These particles drifted into the solar system from the region between stars and were likely formed before the sun was made. Finding them involves combing through millions of images of interstellar material captured by Stardust. Citizen scientists continue to help hunt for the particles by searching through millions of images.