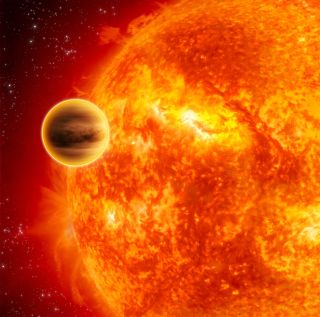 An artist's depiction of 51 Pegasi b, the first exoplanet found orbiting a sunlike star.
(Image: © NASA/JPL-Caltech)

The most recent Nobel Prize in Physics was split between Jim Peebles, a cosmologist extraordinaire, and a pair of Swiss astronomers, Michel Mayor and Didier Queloz.

Mayor and Queloz found the first exoplanet orbiting a sunlike star, which was a landmark discovery for two reasons: it showed conclusively that the sun isn't the only star to host a family of planets (something we had long figured but never demonstrated), and also that the universe is really, really weird.

The careful reader will note in the paragraph above that I was very clear in my wording: Mayor and Queloz discovered the first exoplanet orbiting a sunlike star, not the first exoplanet itself. That credit goes to Aleksander Wolazczan and Dale Frail in 1992. And in fact, they got a two-for-one deal, finding two planets orbiting the same star.

But that star was completely unlike our sun. It was a pulsar, a rapidly rotating, dense leftover core from a once-giant star. That pulsar would regularly splash a beam of radiation over Earth, like the blinking of a distant lighthouse — hence the name pulsar. As the exoplanets orbited around that dead core, they would gently tug on the pulsar, making it wiggle, which would give rise to subtle changes in the frequencies of pulsar splashes here on Earth.

While this was a major find for astronomy, it wasn't exactly what we were searching for. We wanted to know — and still want to know — if there's another Earth out there. And while the concept of planets surviving a supernova detonation and still orbiting the leftover core is a juicy problem to puzzle over, it doesn't directly help us in our hunt. What's more, the technique used on the pulsar relied on the regular frequencies of its pulses, a trick we couldn't use on regular stars.

Instead, we had to watch stars themselves wiggle, and it wasn't until a few years later that astronomers had perfected the technology to deliver that measurement.

The technology relied on a spectrometer, a device for breaking up light from a distant source into its multitude of components (essentially a very scientific rainbow). With that spectrum, astronomers like Mayor and Queloz could find the signatures of known elements, like hydrogen and carbon, from the fingerprints they leave in the spectrum. From there, they could stare at the star day after day, looking for changes in the spectrum.

And those changes in the spectrum could reveal the movement of the star through the Doppler shift. The same shift that causes the wail of an ambulance to change pitch as it passes by you happens to light. When a source is moving towards you, the light gets shifted towards higher, bluer frequencies, and when a source is moving away from you, it goes down to lower, redder frequencies.

This was not a new technique; astronomers have been measuring the Doppler shift of stars for almost two hundred years.

But in 1995 Mayor and Queloz took it one step further, upping the precision of their instrument to new levels, staying on the lookout for even the most minute changes.

If a planet is orbiting a star, the gravity from that planet will pull on the star like a leash on a stubborn dog. The star won't move a lot — stars usually outweigh their planets by several orders of magnitude — but they'll still move, hopefully in a detectable way. And in 1995 the pair of future-Nobel-winners nailed it, confirming the unmistakable back-and-forth wobble in the spectrum of the star 51 Pegasi, a wobble that could only be caused by a relatively small, unseen companion — an exoplanet in orbit.

There's nothing particularly remarkable about 51 Pegasi, and that's what makes the discovery of an exoplanet there so remarkable. It's just a normal, everyday run-of-the-mill star, sitting about 50 light-years away, with a mass about 10% more than the sun and an age just a tad higher, at 6 billion years old.

It's a normal star, living a normal stellar life, with at least one planet in orbit around it. Just like our sun.

The discovery by Mayor and Queloz ushered in a new age of exoplanet hunting, leading to hundreds, and eventually thousands, of confirmed exoplanet detections. They're so commonplace now that announcements rarely even break into the news, and it's only a matter of time before we find an Earth-like twin.

But the planet orbiting 51 Pegasi is nothing like what we see in our solar system, and it was so surprising that one of the first reactions to its discovery was to toss out the result altogether as junk.

But the result of Mayor and Queloz was indisputable, and we had to confront the reality that 51 Pegasi presented us. Its planet, dubbed at the time 51 Pegasi b and now given the name Dimidium by the International Astronomical Union (though some astronomers cling to its informal name of Bellerophon), is a pretty typical gas giant, about half the mass of Jupiter, or 150 times the mass of the Earth.

And it orbits a mere 5 million miles (8 million kilometers) away from its parent star.

For context, that's more than seven times closer than Mercury is to our sun.

How did a massive gas giant, which can only form in the outskirts of a solar system where there's enough raw material to bulk a planet up to such massive proportions, wind up so uncomfortably close to its parent? We're still not exactly sure, but we did come up with a cool name for them: hot Jupiters.

With one dedicated observation, Mayor and Queloz pulled off two tricks. They launched a new era of astronomy research in exoplanets, and they upended decades of understanding of how planets form. No wonder they won a Nobel Prize.