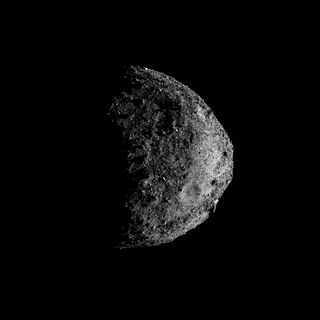 Would-be explorers have high hopes that caches of water scattered throughout the solar system will fuel future rockets.

In new estimates, scientists grapple with just how much water might be out there, looking specifically at near-Earth asteroids as a potential resource. Astronomers have spotted nearly 20,000 such space rocks, and we even have up-close observations of a handful: Japan's Hayabusa2 mission and NASA's OSIRIS-REx mission are each currently orbiting such an object. Not all of them necessarily carry water — but some do.

"We know that there are minerals with water in them on asteroids. We know that from meteorites that have fallen to the ground," lead author Andrew Rivkin, a planetary scientist at Johns Hopkins University Applied Physics Laboratory in Maryland, said in a statement. "It's also possible that Earth's water came largely from impacts."

In addition to the scientific drive behind understanding how life came to be on Earth, mapping water across the solar system is important because water — which can be split into hydrogen and oxygen — might also be used to make rocket fuel. If that scenario becomes common, it would dramatically reduce the price tags of round-trip journeys to space, since rockets leaving Earth would no longer need to be powerful enough to lift the weight of their homebound fuel.

To make their calculation, the team relied on ground-based telescope observations of these asteroids. But those observations are tricky, because the signature of water in Earth's atmosphere can interfere with asteroid measurements. So, the team used a slightly different signature — one that doesn't actually represent water but has only been found in conjunction with the signature that does.

By combining those observations with other measurements as well as data about meteorites that have fallen to Earth from asteroids, the team calculated a basic estimate for how much water could be trapped inside near-Earth asteroids. According to that estimate, there may be between 100 billion and 400 billion gallons (400 billion to 1,200 billion liters) of water spread among these space rocks.

Ideally, the team would like to run similar calculations based on data gathered from space, where Earth's atmosphere won't interfere with the direct signature of water. But those measurements would rely on the launch of the James Webb Space Telescope, which is currently planned for 2021.

The research is described in a paper published in December in the journal JGR Planets.