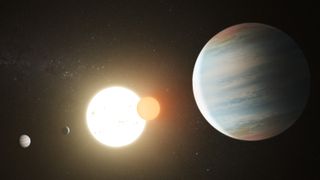 Artist's illustration of the three planets and two stars in the Kepler-47 system, which lies 3,340 light-years from Earth.
(Image: © NASA/JPL-Caltech/T. Pyle)

We all know that iconic scene: Luke Skywalker staring forlornly — and perhaps wistfully — at the double sunset of his home planet, Tatooine.

Long a staple of science fiction, the possibility of habitable planets orbiting a pair of stars has been a challenge to solve for astronomers. But a recent analysis has shown that double sunsets may be just as common in our galaxy as the solitary kind that we know on Earth, and this has big implications for our search for life outside the solar system.

A good fraction of the stars in our galaxy are in binary pairs (or part of even larger collectives). Upwards of two-thirds of the most massive stars live with a companion, while at the other end of the mass spectrum, only one-third of the small red dwarfs find themselves in a pair. But when it comes to finding life beyond Earth, we’re most interested in sunlike stars, and for them it’s split 50/50, with half flying solo and the other half making friends.

So if half the sunlike stars in the galaxy are in pairs, could those systems host Earth-like planets?

For some time, it was thought that the complicated gravitational dynamics of multiple stars would prevent the formation of planets in the first place. But we now know there are two ways for a planet to find a stable home with multiple stellar parents. In the first case, if the binary stars are far enough apart, then a planet can orbit one of them safely, without any gravitational disturbance from its star’s sibling. In this case, the other star is so far away it would appear as just a peculiarly bright star in the planet’s night sky.

The other allowable scenario is if two stars orbit extremely close together. If you place a planet in orbit around the pair at a far enough distance, then all the planet (gravitationally speaking) sees is a single, larger star, and is able to orbit in peace.

While we have found exoplanets in both of these configurations, it was previously thought that these setups were rare and special, and we therefore shouldn’t bother directing our ET searches at binary stars, instead focusing on more promising, more likely homes for life.

But in astronomy, as in all science, you can’t just run on your assumptions and call it a day. You need to test your ideas against reality — nature is often much cleverer than we realize. In this case, we assumed that planets would have a difficult time forming in binary systems, and so our efforts were better spent elsewhere.

Additionally, it’s hard to even look for exoplanets in binary systems. The complicated orbital dance of the stars themselves makes it hard to disentangle the faint whispers of influence from the planets. Just spotting a planet around a single star is already a difficult enough task, so in most surveys the binary star systems we largely skipped over in analysis.

So, because we haven’t looked for planets in binary star systems very often, we haven’t really found many. This is a classic case of observational bias: we didn’t look for something, so we didn’t find it.

That is, until recently. Thanks to Europe's Gaia spacecraft, which has accurately mapped out millions of stars in our galactic neighborhood, a pair of astronomers were able to examine the back catalog of published exoplanet results in a new paper recently posted to the online preprint site arXiv.

Here’s the thing: even though previous exoplanet searches tried to exclude binary systems (because they are hard to analyze, and thought to not be promising candidates anyway), they weren’t always successful. For a telescope with a given magnification, two stars that are close enough together will appear as one. In the recent study, the astronomers found over 300 planetary systems that actually had more than one star, unbeknownst to previous astronomers.

And those accidents provide a treasure trove of information, since they give us a ready-made sample of the frequency of planets around multiple star systems. And the main result is this: planets appear no more or less common in binary systems than solitary ones, a result at odds with previous conceptions.

However, there are more wrinkles to the story. If the binary stars are very close together (separated by less the 2.5 AU), then it's highly unlikely to find a planet there, suggesting that close-in pairs can destabilize the planet formation process. (One AU, or astronomical unit, is the average Earth-sun distance — about 93 million miles, or 150 million kilometers.) On the other hand, binaries that are moderately far apart (between 3 and 6 AU) have an uptick in planet-hosting ability, implying that they have some special sauce that favored, not inhibited, the formation of planets.

While this work is still preliminary, it does suggest that we should broaden our exoplanet searches to binary star systems, because they could be just as likely to host life as any solitary star. So Tatooine may be a real-life possibility for some alien civilization.