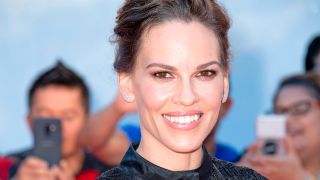 Hilary Swank, who will star in and executive produce "Away" on Netflix, attends the Premiere of 'What They Had' during the Toronto International Film Festival, on September 12, 2018, in Toronto, Ontario, Canada.
(Image: © Valerie Macon/AFP/Getty)

Two-time Oscar winner Hilary Swank will soon be the star and executive producer of new Netflix drama "Away," which follows an astronaut crew's perilous journey through space.

Swank, who has won Oscars for "Boys Don't Cry" and "Million Dollar Baby," is sure to captivate the audience as Emma Green, an American astronaut who commands an international crew on a year-long mission to Mars. "Away is an epic love story and a thrilling tale of survival set against humanity's greatest endeavor - the first human mission to Mars," Netflix said about the series, adding that the series is "about hope, humanity and how ultimately, we need one another if we are to achieve impossible things."

Netflix has so far green-lit 10 episodes of the dramatic series, which has been underway for about six months. The series, very loosely based on an Esquire article of the same name, comes from playwright Andrew Hinderaker (Colossal), Jason Katims (Friday Night Lights, Roswell) and Matt Reeves (Cloverfield, Dawn of the Planet of the Apes).

This will certainly not be Netflix's first or only series focused on astronauts or a perilous journey to Mars. Netflix now hosts National Geographic's series "Mars," which is a docudrama following a crew as they journey to Mars and try to survive the dangers of life on the Red Planet.

Netflix hosts many science and science fiction shows, and you can find a breakdown of the best sci-fi shows to watch on the streaming platform right here, and a list of the best science movies right here on Space.com.