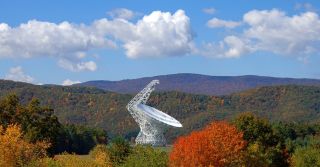 Green Bank Observatory, located in the Allegheny Mountains of West Virginia, is home to eight telescopes, including the world's largest fully steerable telescope, the Robert C. Byrd Green Bank Telescope (GBT). The observatory has been a pioneer in modern radio astronomy since its first telescope, the 85-foot (26 meters) Tatel radio telescope, was built in 1959.

The observatory sits within the borders of the 13,000-square-mile (34,000 square kilometers) National Radio Quiet Zone (NRQZ), where radio transmissions are heavily restricted and regulated to limit interference with the telescopes. The nearby town of Green Bank has been called the quietest town in America, where devices that emit radio waves, including cellphones, Wi-Fi routers and even microwave ovens are outlawed. The radio-free environment allows astronomers to observe sections of the electromagnetic spectrum otherwise drowned out by the constant radio noise we inadvertently create while using modern technology.

"There's nothing else like it in North America and there never will be," said Felix J. Lockman, principal scientist at the Green Bank Observatory. "[The NRQZ] is absolutely critical. It makes Green Bank uniquely suited for radio astronomy."

In the mid-1950s, the United States was falling behind the rest of the world in radio astronomy because of difficulty finding funding. The cost and scale of building and maintaining a radio observatory capable of advancing the field was beyond the means of any individual institution. But the National Science Foundation (NSF) heeded the requests of the radio astronomy community. In 1957, the NSF dedicated a secluded triangle-shaped valley near the small town of Green Bank to become America's first National Radio Astronomy Observatory (NRAO) — what is now the Green Bank Observatory.

Related: 10 Biggest Telescopes on Earth: How They Measure Up

Shortly after the Tatel telescope was completed in 1958, new discoveries started spilling out of the first national observatory. Frank Drake, an astronomer fresh from completing his doctorate at Harvard, discovered the powerful radiation belts surrounding Jupiter in 1959. Later that year, he began the first search for extraterrestrial intelligence (SETI) in history, called Project Ozma. Drake listened for artificial radio signals from two nearby sun-like stars, Tau Ceti and Epsilon Eridani.

"For all we knew at the time, almost every star had strong radio signals coming from it," Drake recalled in an interview with National Geographic. "We might look at only a few stars and succeed."

The search came up empty but inspired Drake to estimate the odds of finding intelligent life in our galaxy, and he created the now-famous Drake equation. Drake's groundbreaking work would be the first of many advancements in the search for life in the universe at Green Bank.

In 1965, the observatory completed construction of the 140-foot (43 m) telescope, which remains the largest equatorially mounted telescope in the world. Equatorial telescopes are aligned with Earth's axis of rotation and follow the path of stars across the sky.

"This instrument is truly part of the history of science," said Karen O'Neil, Green Bank site director, in a statement. "The 140-foot telescope set the stage for modern radio astronomy."

In 1969, astronomers using the telescope detected the first complex organic molecule in interstellar space: formaldehyde. The chemical's discovery showed that although life in the universe remains unseen, the ingredients for life are everywhere. According to NRAO, the telescope has detected nearly half of all known molecules that naturally radiate at centimeter wavelengths.

The hallmark of the Green Bank Observatory today is the GBT, with a diameter of 330 feet (100 m). And with a collecting area of more than 2 acres, the telescope can listen to the faintest whispers of the cosmos, studying the most ancient and bizarre phenomenon of the universe. The enormous machine weighs nearly 17 million pounds (7.7 kilograms) and towers 485 feet (148 m) above the ground, making it taller than the Statue of Liberty.

Originally funded by the NSF, the telescope cost almost $95 million to build and began operations in 2001. The telescope's dish features an active surface made up of thousands of self-actuating panels that correct gravitational deformations. Over time, the force of gravity flattens the shape of the dish, deforming its shape. The panels, which are individually controlled by motors, correct for these deformations and allow the surface to remain perfectly smooth, within 260 microns of deviation, or roughly the width of five human hairs. The surface accuracy has allowed the telescope to achieve extreme sensitivity within its operating range between wavelengths of 2.6 mm and 3 m (0.1-116 GHz).

"The GBT already enables transformative advances in astronomy," Harshal Gupta, the NSF program officer for Green Bank Observatory, said in a statement. "Using the telescope, astronomers from the NANOGrav team recently detected the most massive neutron star, a discovery with implications for understanding the limit at which such stars collapse to form black holes."

According to Lockman, the two previous most massive pulsars were also discovered at Green Bank. He attributes these discoveries to the telescope's unique design and ability to stay on the cutting edge of science.

"A lot of the astronomy that we're doing with the Green Bank Telescope today wasn't even conceived of when the telescope was designed," Lockman said. "So, it's a combination of the fact that it's the most flexible design, it's in a good environment, and the science keeps changing, that I think will make it exciting into the indefinite future."

That future includes the observatory's return to its roots. The search for intelligent alien life continues at Green Bank today through the Breakthrough Listen project. Funded by Russian-Israeli billionaire Yuri Milner, the $100 million project is the largest SETI program in history, and the GBT plays a key role in its search for civilizations beyond Earth. In 2019, Breakthrough Listen released the largest data set in the history of SETI, nearly a petabyte, or 1 million gigabytes, of data from observations of the nearest stars and galaxies. No obvious signs of extraterrestrial intelligence were found, but the search continues.