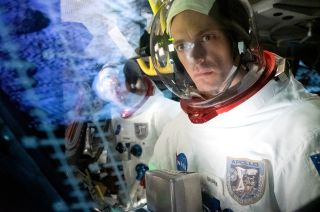 What if, 50 years ago, the first person to walk on the moon was not an American astronaut?

That is the premise behind "For All Mankind," the new alternate history series premiering with the Apple TV+ streaming service this fall. Developed by Ronald D. Moore, the Emmy Award-winning producer of "Star Trek: The Next Generation" and the re-imagined "Battlestar Galactica," the drama picks up where the real-life space race ended, in 1969 with the first human landing on the lunar surface.

"After thousands of years gazing up in the heavens and dreaming of this day, man is about to set foot on the moon," a Walter Cronkite-like news anchor announces in the first trailer for "For All Mankind," released on Monday (June 3). "Across the world, people wait with bated breath."

"There he is!" the anchor exclaims, as the black and white TV set flickers to a familiar-but-somehow-different scene of a ghostly spacesuited figure descending the ladder of a lunar lander. "The shock across this nation at this event is just indescribable."

"The Soviet cosmonaut has become the first to set foot on the moon."

The fallout from a "Red Moon," as a newspaper headline reads in the first-look trailer for "For All Mankind," sets the space achievements of the past half century on a divergent path from what is well-known history, while still involving people whose names are recognizable from the events of real life. For example, the same newspaper reveals that the first man on the moon was "Leonov" — presumably the same Alexei Leonov who, after becoming the first person to walk in space in 1965, was training for a never-to-be moon landing using the Soviets' one-man LK lunar lander.

"We thought it was about being first, turns out the stakes are much bigger than that," says a NASA flight director, addressing his team in Houston Mission Control. "This race will be ours to fight for and to win."

That fight takes NASA down paths it did not explore, including adding women to the Apollo-era astronaut corps. A scene that blends "Astronaut Wives" imagery with that of the "Mercury 13" female pilot trainees shows a group of women in NASA flight suits — and later, one of them posing for an Apollo crew portrait with her two male crewmates.

The trailer also teases the discovery of ice on the moon, and plans for a "moon lab" or lunar base, touching on themes that today are more often associated with NASA's current Artemis program than its Apollo predecessor.

That is not to say, though, that everything in the "For All Mankind" trailer is new. Scenes flash by of what appears to be accurate depictions of the Apollo command module and lunar module, the Saturn V rocket and even the Corvettes that became the early astronauts' car of choice. And though not mentioned in the trailer, a cast list on the IMDb website reveals actors portraying the real-life NASA Administrator Thomas Paine and astronauts Deke Slayton (and his wife Marge), Buzz Aldrin, Mike Collins, Pete Conrad and John Glenn.

The trailer closes with the possible suggestion that the Soviets' success may have come at the Apollo 11 mission's peril. After a scene where Mission Control tries to raise the Apollo 11 crew on the comm loop ("Eagle, this is Houston, do you copy?"), a man with a German accent testifies before a Congressional committee.

"This not the end of the race. We must keep our eyes to the future," he says.

Click through to collectSPACE to watch the first look trailer for Ronald D. Moore's "For All Mankind," coming to Apple TV+ streaming service.