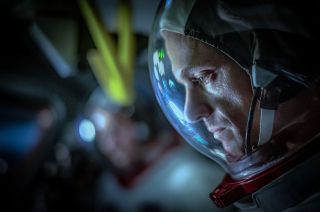 NASA's Apollo missions to the moon play out differently in the wake of a Soviet lunar landing in the new Ronald D. Moore series "For All Mankind," debuting Nov. 1 on the Apple TV+ service.
(Image: © Apple TV+)

"This series is an alternate history."

So begins the disclaimer at the end of each episode of "For All Mankind." The space race drama, which debuts on Friday (Nov. 1) with the new Apple TV+ streaming service, explores how NASA's Apollo program might have unfolded differently if it had been the Soviet Union — and not the United States — that had landed the first human to walk on the moon 50 years ago.

"While some characters are inspired by real people, the characters and events portrayed are fictitious, and any similarity to the name, character or history of any person is entirely for dramatic purposes and not intended to reflect on any actual character, entity, name or history."

For anyone who has even a passing knowledge about the early years of U.S. human spaceflight, the first episodes of "For All Mankind" present a familiar, if not spot-on setting. Legal clauses aside, viewers are quickly introduced to the likes of Deke Slayton (Chris Bauer) and Gene Kranz (Eric Ladin) in a Mission Control that could easily pass for the newly-restored historic landmark in real-life Houston.

"We wanted it to always be tethered to what really happened, so that it wasn't a completely alternate reality," said series creator Ronald D. Moore, whose previous work includes "Star Trek: The Next Generation" and the reimagined "Battlestar Galactica" series. "We wanted the audience to recognize a lot of the events, a lot of the names and feel like everything that they were watching was plausible."

"For All Mankind," though, is an alternate reality. The Apollo 11 astronauts are no longer the first to land on the moon, but they still are Neil Armstrong, Buzz Aldrin and Mike Collins (Jeff Branson, Chris Agos and Ryan Kennedy).

Apollo 10 still flies a full-up dress rehearsal for a lunar landing, doing everything but touching down on the moon — a mission plan that is eyed more critically in the wake of a "Red Moon" — but the crew of the lunar module Snoopy are the fictitious Ed Baldwin and Gordo Stevens (Joel Kinnaman and Michael Dorman).

"I didn't reference to any specific person as a role model. I felt like the writing was so deep and had enough layers for me to just base my character on the writing, and then I filled in the emotional blanks myself," said Kinnaman.

Not that the production didn't know who Baldwin was replacing.

"To be sure, in the writers' room, we specifically talked about the fact that Baldwin is not Tom Stafford," explained Moore. "Yes, that was who the real Apollo 10 commander was, but we made a specific decision that our fictional characters will be loosely based on various astronauts and various people."

"So, really, only the historical figures that we call out by name are the ones we were going to try and make them close to who they really were in reality," Moore said. "Our fictional characters are not really stand-ins for some of those players."

The blending of reality and alternate reality can be distracting, at least at first, if you know the real history. There is a temptation to try to fit the pieces together, to determine where the events of "For All Mankind" diverged from the events as you know them. But it is in that divergence where the series can also soar.

From an unrealized opportunity in both real and fictional life, the story of the so-called "Mercury 13" grows into a plotline that explores not just a woman's place in space, but the rights of all humankind. And a change in assignments for a key figure from space history draws a more critical eye to his past, as seen through the eyes of a perhaps unexpected, fictional character.

"I don't know that we are necessarily offering a brand new lens or anything like that [but] it's just great to be able to contribute to the increase of these kinds of stories," said Jodi Balfour, who plays astronaut Ellen Waverly.

And then there is the direction the space program takes, a change that in some ways parallel NASA's current goals. That, though, was driven more by coincidence and the overall positive theme that Moore hopes "For All Mankind" conveys for the future of space exploration.

"I think that aspiration will show," he said. "It's a positive idea of what could have been and what still could be. It is about the way that reaching out into space can lift people up and give people something to hope for, to give themselves over to an idea that is bigger than now and petty concerns and things that can be distracting in the moment, and a sense of unity and moving forward for all mankind."

"I think it's a hopeful show that is painting a picture of society that we can all aspire to one day," said Moore.

"For All Mankind" debuts on Apple TV+ on Friday, Nov. 1, when the first three episodes will be available to stream. New episodes will then be released weekly.