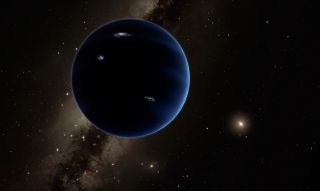 Observations of extremely distant objects such as the newfound FarFarOut could help lead to the discovery of the hypothesized Planet Nine, seen here in an artist's illustration.
(Image: © Caltech/R. Hurt (IPAC))

The solar system has a new distance champ.

Astronomers just found an object that lies 140 astronomical units (AU) from the sun. That's 140 times the Earth-sun distance, which is about 93 million miles (150 million kilometers). In case you want some more perspective: Pluto orbits the sun at an average distance of about 39.5 AU.

"This is hot off the presses," Scott Sheppard, of the Carnegie Institution for Science in Washington, D.C., said during a public lecture last Thursday (Feb. 21) at his home institution.

Related: Solar System Explained From the Inside Out (Infographic)

Indeed, Sheppard announced the detection during that talk; it has yet to be peer-reviewed, or even written up as a paper. Sheppard said he spotted the object, dubbed FarFarOut, just the previous night, as he was going over telescopic imagery collected in January of the outer solar system.

That was good use of a snow day: Sheppard's talk had been scheduled to take place on Feb. 20 but was pushed back because of bad weather. (You can see the entire 54-minute talk here. Sheppard starts discussing FarFarOut around the 39-minute, 30-second mark.)

Sheppard and his team don't know much about FarFarOut. They just spotted it, after all, and haven't gathered enough data to work out its orbit or calculate a size estimate. They plan to keep observing FarFarOut to collect such information, but doing so may be tough.

"It's very faint," Sheppard said. "It's on the edge of our ability to detect it."

The newfound body's nickname is a nod to Farout, the previous distance record holder, whose discovery Sheppard and his colleagues announced in December. Farout, officially known as 2018 VG18, currently lies about 120 AU from the sun. The object is thought to be a dwarf planet that takes about 1,000 years to complete one lap around our star.

To clarify: The distance records we're talking about here are for objects' current locations. There are many bodies that get well beyond 140 AU at some point on their (often highly elliptical) paths around the sun. The dwarf planet Sedna, for example, gets more than 900 AU away. And the gigantic Oort cloud, which begins at about 5,000 AU from the sun, likely contains trillions of comets.

Sheppard has been scouring the outer solar system for years, along with chief collaborators Chad Trujillo of Northern Arizona University and Dave Tholen of the University of Hawaii, using instruments including the 8-meter Subaru Telescope in Hawaii. The researchers are not only surveying a little-known realm but also hunting for signs of the hypothesized Planet Nine (or Planet X, or Planet Next, or Giant Planet Five).

The team's work — and that of other researchers, notably Mike Brown and Konstantin Batygin of Caltech — suggests that Planet Nine may indeed exist in the dark depths of the far outer solar system. The orbits of many small, far-flung objects appear to have been sculpted by the gravity of a big "perturber," which may be about 10 times more massive than Earth and lie, on average, about 600 AU from the sun.

The Planet Nine search is no fool's errand: Sheppard puts the probability of the world's existence at 85 percent, he told Space.com last fall.