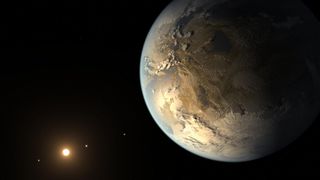 WASHINGTON — Our sun may someday be able to shed light on whether life is hiding on a distant planet, assuming humans can execute a delicate maneuver in space.

The motivation for such a stellar feat would be exceptionally compelling: potentially confirming clues of extraterrestrial life. Astrobiologists searching for whiffs of life beyond Earth target biosignatures, characteristics that are at least most likely caused by life. But scientists are excellent at hypothesizing alternative, nonlife processes for creating biosignatures, which means that identifying these characteristics on distant worlds isn't a guarantee that you've found life.

So scientists may want to target biosignature-laden planets with other techniques in order to be sure. "We want to find a way to get closer [to the planet in question]," Sara Seager, an astronomer at the Massachusetts Institute of Technology, said here last week at the International Astronautical Congress during a panel called Life's Journey Through the Universe. "We want to get another look. We don't really have any ways to do that now."

Seager referenced one possible solution to that quandary: designing tiny satellites that can be pushed on laser beams to make interstellar journeys. "Another kind-of-out-there, but realistic idea is to use the sun as a gravitational lens," Seager said.

Astronomers have plenty of experience using galaxies as gravitational lenses. The technique relies on three celestial objects lining up precisely. First, there's the instrument itself on or around Earth. The second ingredient is a massive galaxy or galaxy cluster, containing so much mass that its gravity warps the path of light. The third point in the line is a distant object that astronomers want to see in more detail. When these players snap into alignment, scientists can capture much sharper images of the target.

The same basic principle may work using our own star as the magnifier, although this would be an entirely different type of feat, one that would need to start with an incredible journey. "We don't know if we can do this for sure," Seager said. "We'd have to slingshot around the sun, pick up speed and go to 500 astronomical units," or 500 times the distance from Earth to the sun. For comparison, the Voyager 1 spacecraft, which launched in 1977 and is humanity's most-distant working probe right now, is just shy of 150 astronomical units from the sun.

Distance isn't the only challenge, either; the alignment necessary for a gravitational lens is unforgiving. "We're not sure if we can do that yet, because you have to line up really precisely," Seager said.

But in a quest as open-ended as the search for alien life, every potential technique represents slightly better odds of answering an enduring question about the universe.