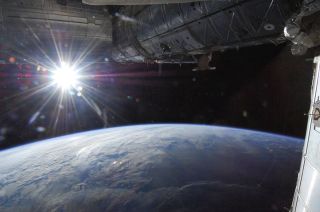 One of the astronauts of Expedition 36 to the International Space Station took this photo on May 21, 2013. In this view from one of the windows of the orbiting laboratory, the sun shines in a "starburst" mode above Earth's horizon.
(Image: © NASA)

Planet Earth is having its annual close encounter of the stellar kind this weekend.

There's nothing unusual about the planet being a little closer to the sun; it's a normal occurrence that happens near the start of the calendar year. Earth travels in an elliptical orbit, so its distance from the sun changes throughout its 365.25 day journey. (Side note: the quarter days are what prompt a leap year every four years.)

Earth doesn't feel warmer for the Northern Hemisphere when perihelion occurs. That's because the ellipse in which our planet orbits is not extreme, but almost circular. The cause of seasonal changes is the tilt in the planet's axis. Perihelion and aphelion don't cause the seasons, but they do affect the length of the seasons.

But again, the seasons are controlled by Earth's tilted axis, not its distance from the sun.

"The sun is the big controller of the radiation that the Earth receives," Walter Petersen, a research physical scientist in the Earth science branch at NASA's Marshall Space Flight Center, told Space.com in 2018. "But even when you take into account that difference in distance between aphelion and perihelion, there's only about a 7 percent difference in average global [solar energy] that we receive. And so it doesn't amount to a great deal in terms of weather."