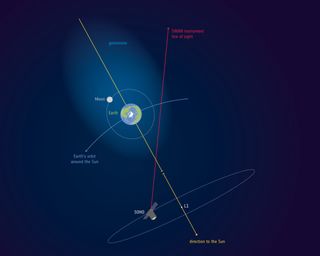 A cloud of hydrogen atoms called the geocorona exists where Earth’s atmosphere bleeds into outer space. New research suggests that this cloud extends far beyond the orbit of the moon, reaching up to 390,000 miles (630,000 kilometers) above Earth's surface.
(Image: © ESA)

Tiny wisps of Earth air stretch way out into deep space, far beyond the moon's orbit, a new study suggests.

"The moon flies through Earth's atmosphere," study lead author Igor Baliukin, of Russia's Space Research Institute, said in a statement. "We were not aware of it until we dusted off observations made over two decades ago by the SOHO spacecraft." [Earth Quiz: Do You Really Know Your Planet?]

SOHO, the Solar and Heliospheric Observatory, is a joint European-NASA probe that launched in December 1995 to study the sun and space weather.

Baliukin and his team analyzed archival data gathered by SOHO's Solar Wind Anisotropies instrument (SWAN) — specifically, measurements of a type of ultraviolet light called Lyman-alpha radiation. Sunlight interacts with geocorona hydrogen atoms at the Lyman-alpha wavelength, which is blocked by Earth's atmosphere (and therefore must be observed from space).

This work allowed the team to map the geocorona's extent and get a handle on the region's density. They found that the geocorona is denser on Earth's day side, because of compression from solar radiation. But "denser" is a relative term: There are just 70 hydrogen atoms per cubic centimeter (0.06 cubic inches) at an altitude of 37,000 miles (60,000 km) on the day side and a mere 0.2 atoms per cubic centimeter at the moon's distance, the new study reported.

"On Earth, we would call it vacuum, so this extra source of hydrogen is not significant enough to facilitate space exploration," Baliukin said.

Scientists have long known that Earth possesses a geocorona; indeed, NASA's Apollo 16 mission photographed this feature from the moon back in 1972. But the geocorona's reach was thought to be much more limited.

"At that time, the astronauts on the lunar surface did not know that they were actually embedded in the outskirts of the geocorona," study co-author Jean-Loup Bertaux, former SWAN principal investigator, said in the same statement.

The new study, which was published last week in the Journal of Geophysical Research: Space Physics, could have applications beyond Earth's backyard. For example, planets with hydrogen in their atmospheric outer reaches often have water vapor closer to their surfaces, the researchers said.

"This is especially interesting when looking for planets with potential reservoirs of water beyond our solar system," Bertaux said.