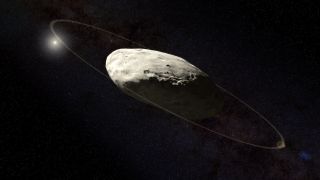 An artist's impression of the dwarf planet Haumea and its ring by citizen scientist Kevin Gill, based on measurements by J.L. Ortiz et al.
(Image: © Kevin M. Gill/Flickr/CC BY 2.0)

The football-shaped dwarf planet Haumea, which is surrounded by an almost perfectly circular ring of particles, is the most distant ringed object in the solar system. Haumea's ring is too faint to be seen from planet Earth, so astronomers have turned to context clues to find out more about these particles.

In a new study, researchers with the São Paulo Research Foundation in Brazil have detailed the ring's size, shape and other characteristics by simulating the Haumea system on a computer. By simulating the ring's particles in different configurations around the dwarf planet and calculating which scenario would render the ring most stable, the scientists were able to infer the likely qualities of the ring without ever looking at it directly.

“Our study isn’t observational. We did not directly observe the ring. No one ever has,” Othon Cabo Winter, an engineering professor at São Paulo State University in Guaratinguetá, Brazil, who led the new study, said in a statement.

Astronomers first spotted Haumea far beyond the orbit of Pluto in 2003, and it was originally classified as a Kuiper Belt Objects (KBO). The dwarf planet's two moons, Hi'iaka and Namaka, were first seen in 2005 by astronomers using the W.M. Keck Observatory in Hawaii. As astronomers began to find more objects like Haumea floating in that outer region of the solar system, the dwarf planet later became one of a handful of far-out bodies whose discovery led to Pluto being demoted from its status as the ninth planet in the solar system to the "king of the dwarf planets" in 2006.

Although astronomers have pretty solid evidence that Haumea has a ring, no one has actually observed the ring directly. The feature is too narrow and distant to see through a ground-based telescope, and no spacecraft has ever flown by Haumea to take photos of the dwarf planet up close. Somewhat ironically, everything we know about Haumea's ring system came from an even more distant object — a bright star named URAT1 533-182543.

In 2017, Haumea briefly passed in front of the star in what's known as a stellar occultation. By looking at how the starlight flickered during the occultation, astronomers hoped to learn more about Haumea's physical properties such as its size, shape and density. But to the researchers' surprise, they discovered the ring system, too.

"The light from the star was observed from Earth as the star was occulted by Haumea. Its brightness decreased as Haumea passed in front of it, enabling the astronomers to obtain information about Haumea's shape," Winter said. "The star’s light also faded when the ring passed in front of it, enabling them to obtain information on the ring as well."

After the occultation, researchers studied the light curves and determined that Haumea and its ring have an orbital resonance of 1:3, which means that in the time it takes the ring particles to complete one orbit around Haumea, the dwarf planet itself completes three full rotations. However, the new simulations suggest that in order for this to be true, the ring can't be perfectly circular.

"Based on simulations using the available data on Haumea and the ring, subject to Newton's law of gravitation, which describes the motions of the planets, we concluded that the ring isn't in that region of space owing to the 1:3 resonance but owing to a family of stable periodic orbits," Winter said. In other words, the ring particles don't orbit the dwarf planet with a resonance of 1:3, but do orbit Haumea periodically in a slightly different path that puts them close to that 1:3 resonance.

So, Haumea's ring is still pretty round, but it isn't as perfectly round as earlier research has suggested. And even though the ring particles appeared to be in orbital resonance with Haumea, their periodic orbits don't form a nice whole-number ratio with Haumea's orbit after all.

The new paper describing Haumea's ring system was published Feb. 7 in the Monthly Notices of the Royal Astronomical Society.