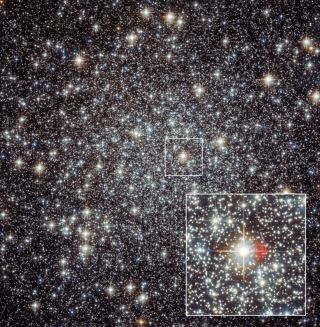 Researchers have discovered a nova at the center of the globular cluster Messier 22, the spot where ancient astronomers observed a stellar explosion.
(Image: © ESA/Hubble and NASA, F Göttgens (IAG))

Astronomers found a 2,000-year-old cosmic fossil embedded in a field of stars — likely the leftovers of an explosion that Chinese astronomers saw and wrote about long ago.

The scientists spotted the remnants of a nova, which is a hydrogen explosion on a star's surface that causes the star to brighten. The nova's remains are still glowing – as a vast cloud of gas called a nebula. The object shines brightly in a new image of a star cluster called Messier 22.

"The position and brightness of the remains match an entry from 48 BC in an ancient collection of observations by Chinese astronomers," lead author Fabian Göttgens, a Ph.D. astrophysics student at the University of Göttingen, said in a statement. "They probably saw the original nova in the same place."

Over thousands of years, the explosion dispersed into a cloud of gas visible today — a vast expanse some 8,000 times larger than the distance between the sun and the Earth. Astronomers spotted the nova, inside of the constellation Sagittarius, with the Multi Unit Spectroscopic Explorer (MUSE); the instrument is installed on the European Southern Observatory's Very Large Telescope in Chile.

"[MUSE] does not only produce images, [but] it also simultaneously splits starlight by colour, measuring the brightness of stars as a function of colour," University of Göttingen officials added in the statement. "This makes it particularly suitable for finding nebulae that often only glow in a certain colour — usually red."

Göttgens research  is part of his Ph.D. work with the University of Göttingen's Stefan Dreizler, a co-author of the paper. The work will be published in the journal Astronomy & Astrophysics, according to the statement.