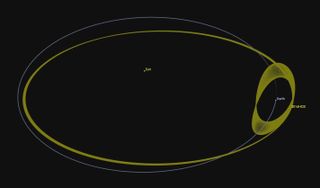 The asteroid 2016 HO3 has an orbit around the sun that keeps it as a constant companion of Earth.
(Image: © NASA/JPL-Caltech )

China is expanding its robotic space-exploration plans far beyond the moon.

The nation, whose Chang'e 4 spacecraft pulled off the first-ever soft landing on the lunar far side this past January, aims to launch a bold mission just three years from now that will explore both an asteroid and a comet, according to China's state-run Xinhua news agency.

The current plan, which is still under discussion, calls for a probe to visit and collect samples from the small near-Earth asteroid 2016 HO3 (also known as Kamo'oalewa).

Related: Chang'e 4 in Pictures: China on the Moon's Far Side

"Then, the probe will fly back to the proximity of Earth, and a return capsule will be released to bring the samples back to Earth," Xinhua reported today (April 18), citing a China National Space Administration official. "After that, the probe will continue its journey. With the assistance of the gravity of Earth and Mars, it will finally arrive at the main asteroid belt and orbit the Comet 133P to explore it."

Comet 133P/Elst-Pizarro is not your typical icy wanderer. Rather, it's an odd hybrid beast known as a "main-belt comet" — an asteroid-belt body that has displayed comet-like activity in the past. Indeed, 133P also has an asteroid designation: 7968 Elst-Pizarro.

The object may in fact be an "active asteroid," a cosmic class with just a handful of known members. A recent addition to this list is the near-Earth space rock Bennu, which NASA's OSIRIS-REx probe has been exploring up close since late last year. OSIRIS-REx has observed numerous ejections of dust particles from the 1,650-foot-wide (500 meters) Bennu, the cause of which remains a mystery.

The planned Chinese mission will likely last about 10 years, Xinhua reported. During that time, the spacecraft will gather a variety of data, which will help scientists better understand the two objects' composition, structure, orbit, rotation, shape and size, among other characteristics.

China is not alone in its desire to return samples from an asteroid. OSIRIS-REx will return pieces of Bennu to Earth in September 2023, if all goes according to plan. And Japan's Hayabusa2 mission has already snagged bits of the 3,000-foot-wide (900 m) asteroid Ryugu. This material is scheduled to land on our planet in late 2020. (The original Hayabusa mission brought tiny pieces of the stony asteroid Itokawa home in 2010.)

China also intends to snag some moon rocks, as part of its ambitious and ongoing Chang'e lunar program. The Chang'e 5 sample-return mission will launch toward Earth's nearest neighbor this December, if all goes according to plan.