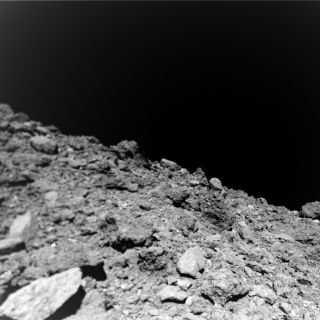 A robot deployed on one of the darkest asteroids in the solar system may now shed light on the origins of some of the oldest, rarest meteorites, a new study finds.

These findings suggest that this asteroid formed during a collision of two very different space rocks, the scientists said. The research also suggests that dust may float off this asteroid, possibly driven by electric fields.

In 2018, the Japanese spacecraft Hayabusa2 arrived at Ryugu, a 2,950-foot-wide (900 meters) near-Earth asteroid that is one of the darkest celestial bodies in the solar system. Its name, which means "dragon palace," refers to a magical underwater castle in a Japanese folktale.

One reason scientists may want to learn more about Ryugu is because its orbit brings it close — potentially dangerously close — to Earth.

"Knowing the composition and geological structure of asteroids and comets is essential to [developing] mitigation strategies in the case of potential collision scenarios," study lead author Ralf Jaumann, a planetary scientist at the Institute of Planetary Research in Berlin, told Space.com.

In addition, previous research suggested Ryugu may contain primordial material from the nebula that gave birth to the sun and its planets. Hayabusa2 is designed to return samples from the asteroid to shed light on the formation of the solar system.

To investigate Ryugu's surface, Hayabusa2 deployed the Mobile Asteroid Surface Scout (MASCOT) lander. This shoebox-size robot took photos both as it dropped from the main Hayabusa2 spacecraft onto Ryugu and after it landed on the asteroid's surface, where it operated for a little more than 17 hours before its batteries ran out.

"To have this small lander reaching the surface and providing detailed images of the surface was very exciting," Jaumann said.

MASCOT found Ryugu was covered with two kinds of rocks and boulders — one dark with a cauliflower-like, crumbly surface and the other bright with smooth faces and sharp edges. Both types are nearly evenly distributed on the surface of the asteroid, suggesting Ryugu was a pile of rubble that coalesced after two parent bodies crashed into one another, "indicating a violent history of asteroid collision," Jaumann said.

Close-up images of Ryugu's dark, rough stones revealed they often seem to possess small, colored inclusions similar to those found in one of the most primitive and rare types of meteorites, known as carbonaceous chondrites.

"Carbonaceous material is the primordial material of the solar system, from which all planets and moons originate," Jaumann said. "Thus, if we want to understand planetary formation, including the formation of Earth, we need to understand its building parts." He said the new findings support long-standing speculation that carbonaceous chondrites come from C-type asteroids — dark-gray, carbon-rich space rocks such as Ryugu.

Unexpectedly, the MASCOT images of Ryugu showed no fine dust, which scientists had expected would accumulate on the asteroid's surface due to micrometeoroid impacts and other forms of weathering. The mission's predecessor, Hayabusa, found that another rubble-pile asteroid, Itokawa, also seemed dust-free.

The researchers suggested that some as-yet-unknown force removes dust from Ryugu's surface. Electric fields on the asteroid might cause dust to float away, Jaumann said, or micrometeoroid impacts and seismic vibrations could be responsible.

The scientists detailed their findings online on Aug. 22 in the journal Science.