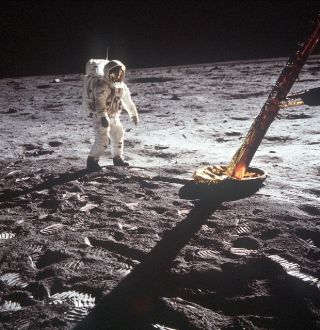 Buzz Aldrin on the moon during the Apollo 11 mission.
(Image: © NASA)

Living legends, astronauts, engineers and other extraordinary guests will all gather this upcoming Saturday (March 16) for the 115th Explorers Club Annual Dinner in New York City. The event will celebrate the pioneers of space exploration as the 50th anniversary of the Apollo 11 moon landing draws closer.

This upcoming summer, the first human footprints on the lunar surface will turn 50. The historic Apollo 11 mission captivated the world's attention and imagination; millions watched Neil Armstrong and Buzz Aldrin make their marks in the dusty regolith as Michael Collins remained in lunar orbit. This event will not only celebrate the achievements of Apollo 11, but all of the missions of the Apollo Project and the incredible progress that has been made in spaceflight over the last 50 years. The event will gather astronauts who flew on these courageous missions all together in the same room — and the conversations that they share this weekend are bound to be out of this world. (Explorers Club may add the specific astronauts attending to their site.)

The Explorers Club Annual Dinner will take place at the Marriott Marquis in Times Square. The day's events will begin with an Apollo astronaut symposium at which astronauts who flew as part of the Apollo program will share their thoughts.

The event will continue with a cocktail reception, a silent auction and a black-tie awards dinner. The dinner holds "surprises in store!" for eventgoers, according to the Explorers Club website. Although the public is able to purchase tickets to the day's events (at prices ranging from $500-$2,500), the annual dinner is currently sold out.