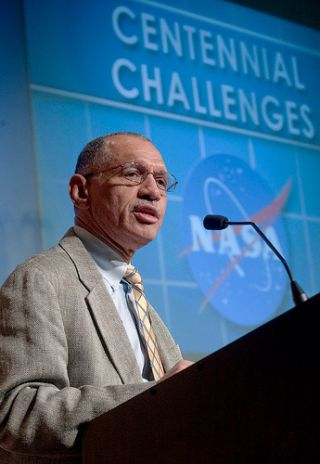 WASHINGTON ?U.S.-Chinese cooperation in human spaceflight, while not necessary foreithercountry to succeed in their endeavors, could yield astounding results,according to NASA Administrator Charles Bolden.

"Theydon't need us, and we don't need them," Bolden said Nov. 16 during anall-hands address at one of the agency's main human spaceflightfacilities, theMarshall Space Flight Center in Huntsville, Ala. "But I happen to beonewho kind of every once in a while just wonders about what things couldbe likeif we were able to bring more countries into the partnership."

Bolden'saddress was closed to reporters, but a transcript of theevent was obtainedby Space News.

U.S. Reps.Frank Wolf of Virginia and John Culberson of Texas ? both members ofthe HouseAppropriations commerce, justice, science subcommittee that approvesNASA'sannual budgets ? wrote Bolden on the eve of his departure stating theiropposition to the NASA chief leading talks with Chinese officials aboutmannedspaceflight programs. They also asked for a briefing uponBolden's return.

Although theNASA chief issued a public statement following the visit, he has yet tosharedetails of the trip with lawmakers. But during his remarks at Marshall,Boldenshed some light on the visit, which he said afforded an opportunity "tosee everything ? everything we asked for, plus some more," according tothe transcript.

Bolden saidhis delegation included Bill Gerstenmaier, head of NASA's SpaceOperationsMission Directorate, and Peggy Whitson, chief of the agency's astronautoffice,both of whom joined him for a tour of China's Long March rocketproductionfacility and the China National Space Administration's astronauttrainingcenter in Beijing.

The groupalso traveled to the Gobi Desert to see launch facilities that support China'shuman spaceflight and military satellite programs.

"So it'sa different environment than what we're accustomed to. The People's[Liberation] Army runs everything. That's just the way it is," he said,adding that China is "struggling right now with how they split upresponsibility for programs."

Bolden saidthat on his final night in the communist country he met with China'stop humanspaceflight official, a three-star general "who ironically is also headoftheir anti-satellite program. An odd mix of responsibility."

Bolden saidthe two had a frank discussion of the merits of bilateral cooperationin spacein which the official, whom he did not identify by name, said thepotential towork together is "incredible" but that the UnitedStates and China do not need each other.

"Heintroduced the conversation and he said they're going to be verycandid. We don'tneed you. We don't need the United States and you don't need us,"Boldensaid.

Bolden saidthe meeting did not involve discussion of any specific mannedspaceflightproposals.

"Wedidn't go to propose or to make any deals or anything. We went tolisten,"he said. "But I told them that if anything was going to come from arelationship between the United States and China in space, then theywould haveto demonstrate to us that they could be transparent in all dealings,that theywould have to demonstrate that they were willing to exercisereciprocity, whichmeans they give us something, we give them something and we go back andforth.And then the third thing is they had to be mutually beneficial to bothnations.If we didn't get anything out of it, we weren't interested."

Still,Bolden said he thinks the Chinese are eager to cooperate with otherspacefaringnations.

"It'sgoing to be difficult and it will take years, but we may get theresometime,"he said.

Thisarticle was provided by Space News,dedicatedto covering all aspects of the space industry.