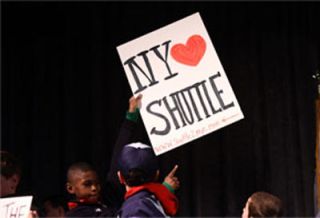 A young cub scout holds up a sign supporting the location of a NASA space shuttle at the Intrepid Sea, Air and Space Museum during a March 13, 2010 event at the New York City-based museum.
(Image: © Intrepid/Shuttle2NYC.com)

NEW YORK - Amongst its myriad other tourist attractions andlandmarks, the Big Apple could become home to one of NASA's retiring space shuttlesfollowing the retirement of the fleet in 2011, according to news reports.

Susan Marenoff, executive director of New York City'sIntrepid Sea-Air and Space Museum, is lobbying hard to snag one of the historicspace shuttles for her museum's collection once they are retired in 2011,the NewYork Daily News reports.

"We believe the merits of New York City and theIntrepid will continue to position New York to be a final destination for ashuttle," Susan Marenoff, the museum's executive director, told the DailyNews. "The opportunity for an enormous population to visit, to learn andsimply see this icon in a contextual historical setting simply cannot beignored."

Earlier this year, the museum launched on-siteand online campaigns to gather signatures of support for acquiring a spaceshuttle.

The bids will likely be subject to a highly politicalprocess, but Marenoff thinks the Intrepid stands a good chance of landing ashuttle, so long as Congress plays fair. Still, Marenoff and the aircraftcarrier-turned-museum could face an uphill battle, thanks to the resultsof the November election.

According to the Daily News, Republicans from Texas, whohave previously expressed interest in having a shuttle displayed in their homestate, were set to take control of key House committees that have a hand inshaping NASA's budget.

The agency's three operational shuttles ? Discovery,Atlantis and Endeavour ? are set to be retired next year, and will be up forgrabs for interested museums in the United States. Discovery, NASA'soldest and most-flown space shuttle, is set to fly on its final mission todeliver supplies, science experiments and spare parts to the InternationalSpace Station on Dec. 3.

Over 20 museums and institutions across the nation haveplaced a bid for one of the three shuttles that have flown in space, includingthe Tulsa Air and Space Museum in Oklahoma; the Museum of Flight in Seattle,Washington, the Brazos Valley Museum of Natural History in Bryan, Texas; theEvergreen Aviation and Space Museum in McMinnville, Oregon; the CaliforniaScience Center in Los Angeles; and the Kennedy Space Center Visitor Complex inFlorida.

The Smithsonian has reportedly been planning to obtainDiscovery, but NASA officials have yet to set a date for the announcement ofthe shuttles' final homes.