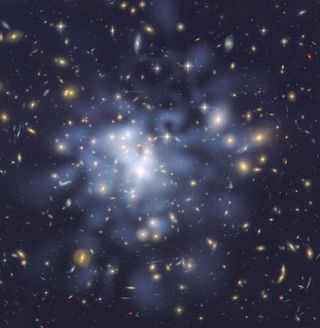 Astronomers have created a new,incredibly detailed map of darkmatter by using the Hubble Space Telescope to peer through a hugecluster ofgalaxies as if it were a cosmic magnifying glass.

Though invisible, darkmatter makes its presence known through its gravitational tugon normalstuff. Scientists now calculate that dark matter could make up 80percent ofall the matter in the universe.

The new dark matter map could revealsecrets not just aboutdark matter, but about its equally enigmatic sibling, darkenergy. This is the name given to the perplexing force thatis pullingagainst gravity, causing the universe to balloon in size ever morerapidly. [Newmap of dark matter]

The dark matter map was created withobservations from theHubble  telescope of a large galaxy cluster called Abell 1689,located 2.2billion light-years from Earth. This cluster is famous as a stunningexample ofgravitationallensing ? a phenomenon predicted by Einstein that happenswhen massiveobjects warp the space-time around them, causing even light to travelon a bentpath when it passes by.

When astronomers look at Abell 1689,they can see distortedpictures of the galaxies that lie beyond it in our line of sight: Asthosegalaxies' light travels from them to us, it passes through Abell 1689and isbent and magnified.

By studying this so-called lensingeffect, scientists candeduce the mass that is causing the warping.

Astronomer Dan Coe of NASA's JetPropulsion Laboratory inPasadena, Calif., and Edward Fuselier of the United States MilitaryAcademy atWest Point teamed up to apply a new mathematical formulation to Hubbleobservations of Abell 1689. The result is the most accurate, detailedcalculation so far of the cluster's mass distribution, including themass thatcan't be accounted for by the visible matter ? meaning, the darkmatter.

"The lensed images are like a bigpuzzle," Coesaid. "Here we have figured out, for the first time, a way to arrangethemass of Abell 1689 such that it lenses all of these background galaxiestotheir observed positions."

"Abell 1689 appears to have been wellfed at birth fromthe high density of dark matter surrounding it," Coe toldSPACE.com. "This has given it a chubby belly which it has carried through itsadult lifeto appear as we observe it today."

"What it might be saying is thatclusters may haveformed earlier than simulations show," Coe said. "My work lends moresupport to this idea we've had from these other analyses."

Because the universe has beencontinually expanding sinceits birth, it was once much denser than it is now. The extra heavycores ofgalaxy clusters suggest they were born during these early stages whensuchdense conglomerations of matter were around.

But if galaxy clusters did get anearly start in forming,that presents a quandary, because scientists would expect to see a lotmore ofthem around today.

That indicates that perhaps the forceof dark energy wasstronger in the young universe than scientists have thought. Becausedarkenergy works against gravity, pulling matter apart, its force wouldhavesuppressed the formation of galaxy clusters, and could havecounteracted thehead start clusters had in forming, scientists think.

To test this hypothesis, theresearchers want to investigateeven more galaxy clusters. They plan to begin a project called CLASH(theCluster Lensing and Supernova survey with Hubble) to look at 25 otherclustersover the next three years.

"We're going to see whether yourregular-Joe clustersalso have these chubby bellies," Coe said.

If the dense centers found in Abell1689 and other largeclusters hold for the larger sample, it will lend support to the ideathat darkenergy was stronger earlier in the universe. If not, then it could meanthatthese few mega clusters just happen to have been special.

All in all, scientists may be gettingcloser to solving theriddles of dark matter and dark energy than ever before. For example,detectorson Earth and in space are currently searching for elusivesignals from dark matter that could reveal the nature of thisbefuddlingmatter.

"I think we have a little bit betteridea of what darkmatter might be and we have a lot of different ways we're looking forit,"Coe said. "Within the next five years or so we hope to maybe have aclearsignal from one or more of these experiments."