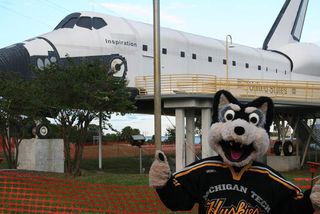 NASAtried to launch Discovery on Friday (Nov. 5) afterfour days of delays due to technical glitches and foul weather, butultimately calledoff the space shotuntil Nov. 30 due to a fuel leak andexternal tank crack.

"Hehad a wonderful time anyway," Michigan Techspokeswoman Jennifer Donovan told SPACE.com. "He got to visit theAstronaut Hall of Fame, to sit in a gravity-force simulator, and to doallkinds of other Florida things (beach romp, surf shop visit) that werefirst-times for a Husky from the snowy Upper Peninsula of Michigan."

TheMichigan Tech mascot paid most of his own way toFlorida, with help from a private supporter of Michigan Tech athletics,Michigan Tech officials said. As to the person inside the Blizzard suit? thatremains a mystery, they added.

"Blizzard'sidentity is a closelyguarded secret, and he wants it to stay that way," Donovansaid.

Nicholswrote that she attended Discovery's first launchattempt on Nov. 1 before heading home to California for the Nov. 2elections.Aldrin wrote that he was in Florida in time for Discovery's Nov. 5launch try.

NASAcurrently hopes to launch the space shuttleDiscovery on Nov. 30 at 4:05 a.m. EST (0905 GMT). The planned 11-dayspacemission will mark the final flight of Discovery and will deliver a newstorageroom and humanoid robot to the International Space Station.

NASAis retiring Discovery and its two other orbiters,Atlantis and Endeavour, in 2011 to make way for new space explorationeffortsaimed at sending astronauts to visit an asteroid and, eventually, Mars.Discovery and its sister ships will be retired to museums to bedisplayed forthe public.