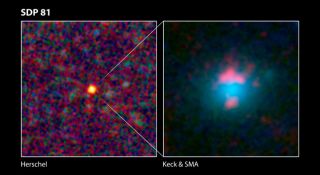 This image composite shows a warped and magnified galaxy discovered by the Herschel Space Observatory. This is just one of five gravitational lenses found in the first set of data released from the Herschel-ATLAS survey.
(Image: © ESA/NASA/JPL-Caltech/Keck/SMA [Full Story])

Previouslyhidden behind veils of dust, ancient galaxies have been detected usinganeffect caused by the space-time distortions in the vast distancebetween thosegalaxies and Earth.

Thediscovery of the distant galaxies could shed light on formation of theearlyuniverse and galaxies, researchers said. [Newphoto of theancient galaxies]

Distantgalaxies are normally difficult to see, but those whose dim light areshroudedin dust are especially difficult to detect, even using the largestavailabletelescopes. However, astronomers are able to essentially boost theeffectiveness of their telescopes by relyingon lenses of a sort ? massive galaxies or clusters ofgalaxies between theastronomers and the objects they want to look at.

Thegravitational pull of massive intervening objects distorts space-time,aneffect that can deflect light. This "gravitationallensing"can increase the visibility of the distant galaxies ? or possibly leadresearchers to seeing multiple images of them.

Theobjects seen in the submillimeter range are generally thought to bedistant,dusty galaxies undergoing a vigorous burst of star formation. Thisintenseactivity generates the dust that obscures them. In a wedge of sky thatresearchers analyzed, they discovered what appears to be five newgravitationally lensed, dusty star-forming galaxies.

"Iwas predicting about four to six of these sources to be detected in ourfirstdata collected one year ago," said researcher Mattia Negrello, anastronomer and cosmologist at The Open University in Milton Keynes,England."Those data corresponded to about 3 percent of the total area that willbemapped by Herschel within the H-ATLAS (Herschel Astrophysical TerahertzLargeArea Survey). You can imagine how excited I was when we discoveredexactlyfive."

Themethod the researchers used was simpler than past techniques.

Theyobserved the sky for submillimeter radiation, identified the brightestobjectsand removed a few "contaminants" such as nearby galaxies. Everythingthatwas left turned out to be the star-forming  galaxies. "This isarguablythe easiest way to spot gravitational lensing events ever conceived,"Negrello said.

Thefive galaxies the researchers found are just the tip of the iceberg,Negrellotold SPACE.com. "We expect to discover more than 100 of them in thefullH-ATLAS," he said. By capturing details amplified by gravitationallensingon largenumbers of these galaxies, the scientists hope to betterunderstand howthey formed and evolved.

Thescientists detailed their findings in the Nov. 5 issue of the journalScience.