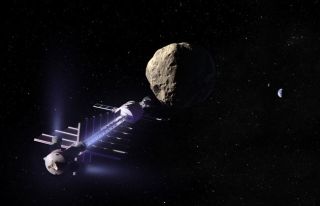 A concept spacecraft could use gravity to tow asteroids away from a collision course with earth.
(Image: © Dan Durda - FIAAA / B612 Foundation)

National emergency plans for natural disasters can also workin the unlikely scenario of an asteroid strike on the U.S., according to aletter to Congress by the White House's top science adviser, SPACE.com haslearned.

The 10-page letter by John Holdren, director of the WhiteHouse Office of Science and Technology Policy, adds that the U.S. has aresponsibility to the world as the country most capable of detecting spacerocks that threaten Earth. The Oct. 15 letter obtained by SPACE.com isaddressed to the leaders of the House Committee on Science and Technology.

Holdren states that NASA must continue leading efforts toclose the gap in detecting and perhaps deflecting near-Earth objects (NEO). TheU.S. space agency already has the duty of alerting the rest of the governmentabout any threateningspace objects.

Holdren's letter also laid out the duties of other federalagencies in handling emergency communications and response. It called for a"senior-level interagency simulation exercise" to test impact-responseplans before the United States is confronted with an actual asteroid impact.

"My immediate reaction is that it represents the mostdetailed consideration of the U.S. government's response to the NEOthreat to date, more clearly delineating communication links andresponsibilities than had previously been the case," said Clark Chapman,space scientist at the Southwest Research Institute in Boulder, Colo.

According to Holdren's letter, the Federal EmergencyManagement Agency, under the Department of Homeland Security, has the mainresponsibility on the ground in the U.S. FEMA can rely in part upon theNational Warning System, which was designed to alert U.S. citizens to a ColdWar nuclear attack.

The Department of Defense would work with NASA on possiblemitigation or deflection scenarios that involved military resources.

Meanwhile, the Department of State would help coordinate anyinternational warnings or responses in a deep-impact scenario that affects morethan just the U.S. It has experience notifying other countries about re-enteringhuman-made space objects, including the defunct USA-193 spysatellite that was ultimately destroyed by a U.S. Navy missile.

"The United States is currently the world leader in NEOdetection activities and will have a vital role to play in such communications,irrespective of whether the direct risk to the United States or its territoriesis considered low," Holdren said.

A NASA advisory council recently suggested that the spaceagency set up an official PlanetaryDefense Coordination Office to lead protection efforts against threateningasteroids or comets.

NASA has begun closing in on its congressionally directedgoal of finding at least 90 percent of all NEOs with a diameter of 1 kilometeror greater. Search teams had discovered about 903 of an estimated 1,050 NEOs inthat size category as of Oct. 1, and the space agency plans to reach its 90percent detection goal by the end of this year.

Yet NASA estimates that the 6,416 known NEOs in the smallersize category, less than 1 kilometer wide, represent just five percent of theexpected count. In other words, there are probably many more objects out there thatrepresent a possible threat to Earth.

Some of those objects were discovered more recently byNASA's sky-mapping WISE mission, which is slated to end in January 2011. Butthere are possible plans for ground-based telescopes that could join the hunt,such as the Air Force's Space Surveillance Telescope and the Large SynopticSurvey Telescope.

The National Research Council and NASA also suggested thepossibility of a dedicatedasteroid hunter that would fly in a Venus-trailing orbit. No firm planshave been made for this.

President Barack Obama's new National Space Policy and planfor human spaceflight has also targeted a human mission to an asteroid by 2025.That could prove a useful dry run of sorts for any future efforts that mightneed to deflect an asteroid away from Earth.

"The planning, required capabilities, and ultimateexecution of such a mission also would parallel most aspects of a potentialrobotic asteroid-deflection mission, providing valuable experience in asteroid-rendezvoustechniques," Holdren said.