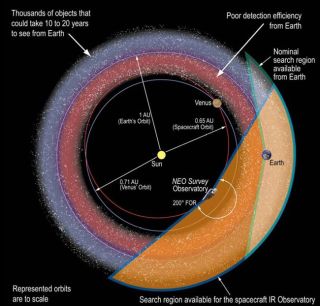 This image shows the position of a potential asteroid survey spacecraft that could be positioned in a Venus-trailing orbit to search for near-Earth asteroids and comets that could pose an impact risk to our home planet.
(Image: © National Academy of Sciences)

NASA's effort to hunt down and identify nearby asteroids that may one day threaten all life on Earth may be starved for funding, according to a recent report, but two potential space telescopes — and an influx of cash — could go a long way toward safeguarding the planet from catastrophe.

One space rock-hunting telescope would sit in orbit directly between the sun and Earth. The other would follow the orbit of Venus closer to the sun.

Together, they could act as silent sentries in space, scanning the solar system for hazardous asteroids. Each proposed telescope, by itself, could help find more than 90 percent of nearby asteroids that are 460 feet (140 meters) across or larger, as the U.S. Congress directed NASA to do back in 2005.

That's the smallest size though to pose a real impact threat to Earth. The catch — Building them both would cost $1.1 billion.

And such space telescopes are only help take the first necessary step toward better understanding potentially killer space rocks. Finding most near Earth objects (NEOs) still leaves the question of what it would take to mitigate or stop an object headed on a collision course for Earth.

"In terms of mitigation, there is nothing that we would be confident in deploying next week," said Michael A'Hearn, an astronomer at the University of Maryland who headed the mitigation panel for the report issued last week by the National Academy of Sciences.

Both space telescopes would represent 0.5-meter infrared telescopes that draw on the heritage of NASA's Spitzer Space Telescope, as well as the KeplerSpace Telescope and NASA's latest — the WISE space observatory. Infrared vision allows the telescopes to see cold, dusty or distant space rocks that might remain hidden from equal-sized optical telescopes.

The first proposed space telescope, a $500-million mission put forward by NASA's Jet Propulsion Laboratory (JPL) in Pasadena, Calif., would take advantage of one of several sun-Earth Lagrange points. These are locations where the gravitational forces of the sun and Earth perfectly balance out the orbital motion of a visiting telescope or spacecraft.

The L1 Lagrange point would allow JPL's space telescope to hover between the sun and Earth, despite having a smaller orbit than the Earth.

If launched, the space telescope could find 90 percent of the larger NEOs predicted to be orbiting the sun after 10 years, according to a mission profile. Throwing ground-based telescopes into the hunt could also speed up the rate of discovery, cutting the time required to about eight years.

But a Lagrange point telescope that keeps pace with Earth might not spot many space rocks on the far side of the sun for one or two decades.

The Venus-trailing mission proposed by Ball Aerospace and Technologies Corp. of Boulder, Colo., would cost $600 million, but holds a few more advantages compared to the Lagrange point telescope.

One is its scanning range. Unlike the L1 asteroid-hunting observatory, a Venus-trailing telescope could cover the far side of the sun because its nearly Venus-like orbit would take just 206 days to go around the sun, versus Earth's 365-day orbital period.

"There is a fundamental difference in finding objects that have orbital periods that are roughly a year, because the Venus-trailing orbit sweeps around to other side of sun from Earth, and the Lagrange [point] telescope does not," A'Hearn told SPACE.com.

According to its mission profile, the spacecraft could find more than 90 percent of larger hazardous NEOs within eight years on its own, or finish the job in less than five years by cooperating with ground-based telescopes.

A view from the Venus-trailing orbit would also allow the space telescope to better spot possible threats beyond Venus but inside Earth's orbit, whereas the Lagrange point telescope would have difficulty surveying that inner band of NEOs.

NASA has tried identifying NEOs on a budget of just $4 million per year, so either telescope could only be a huge boost for current efforts if funding becomes available. But even spotting 90 percent of the larger NEOs would solve just part of the problem for scientists, who also want to figure out ways to stop Earth-bound space rocks.

Much of the unknown arises from the wide range of densities of asteroids in space.

Some resemble comet-like objects made of ice and rubble, while others consist of dense rock or even metal. The uncertainty looms so large that scientists would currently have to rely on "massive overkill" and try to use 10 times the estimated force needed to nudge aside an incoming object, A'Hearn noted.

A'Hearn and others favor launching exploratory space missions that would kamikaze into two different types of NEOs on either end of the wide spectrum of densities, so that scientists could at least begin to gauge the effect of such kinetic projectiles on space rocks. Such missions could support mitigation research even as space and ground telescopes continue to survey Earth's neighborhood.

After all, a failed effort by one nation to deflect an incoming NEO might only succeed in changing the impact site of the space rock.

"If you launch to mitigate and only move it halfway, that just moves it from my country to your country," A'Hearn said. "Because of that, I think we need very real international collaboration before we launch mitigation efforts."