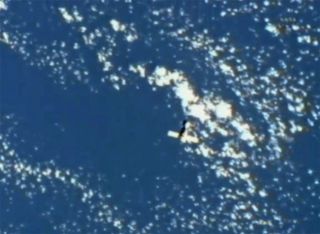 The Russian Soyuz TMA-18 spacecraft carrying the three Expedition 24 crewmates back to Earth on Sept. 24-25, 2010 is seen by video cameras on the exterior of the International Space Station just after undocking.
(Image: © NASA TV. [Full Story])

A Russian Soyuz spacecraft with three astronauts aboard successfullyundocked from the International Space Station late Friday (Sept. 24) to beginthe voyage home, one day after a technical glitch delayed its departure.

The Soyuz TMA-18 spacecraft cast off from the spacestation right on time at 10:02 p.m. EDT (0202 Sept. 25 GMT) in a flawless undocking with nohint of the undockingmalfunction that thwarted its first attempt yesterday.

"We have separation,"said Soyuz commander AlexanderSkvortsov, a Russian cosmonaut, as the two spacecraft separated whilesailing 220 miles (354 km) above the Russian-Mongolia border.

Skvortsov is returning to Earth with fellow cosmonautMikhail Kornienko and American astronautTracy Caldwell Dyson to cap a 176-day spaceflight. They are due to land onthe steppes of Kazakhstan in Central Asia at 1:21 a.m. EDT (0521 GMT).

The astronauts'homecoming was delayed by one day due to a malfunctioning microswitch spacestation's Russian Poisk docking port, where their Soyuz vehicle was parked. Thefaulty part prevented a set of hooks and latches on the docking port fromreleasing its grip on the Soyuz. [Graphic? Inside and Out: The International Space Station]

Astronauts onthe station bypassed the switch with a set of electrical cables and Friday'sundocking went smoothly.

"Okay guys,God be with you," one of three astronauts remaining behind on the spacestation told the Soyuz crew.

The spacestation is typically staffed by a full crew of six astronauts, though theyarrive on a staggered schedule of three people per team.

Remainingbehind on the space station are American astronauts Doug Wheelock, ShannonWalker and Russian cosmonaut Fyodor Yurchikhin. They will be joined next monthby a new three-person team.

Next up forthe astronauts on the returning Soyuz is the deorbit burn, an engine maneuver thatwill slow their spacecraft to begin its final descentand landing.

That engineburn is slated to begin at 12:32 a.m. EDT (0432 GMT). The Soyuz crew capsulewill later separate from the vehicle's two expendable modules, and then deploya parachute to slow its descent. A set of retrorockets will cushion thecapsule's landing on the Kazakh steppes.