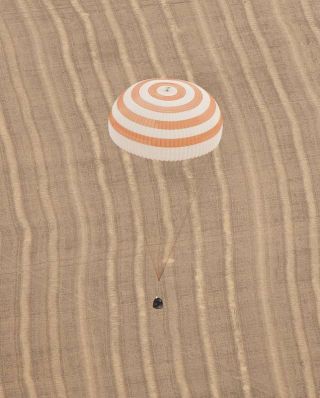 The Russian Soyuz TMA-18 spacecraft is seen as it lands with Expedition 24 Commander Alexander Skvortsov and Flight Engineers Tracy Caldwell Dyson and Mikhail Kornienko near the town of Arkalyk, Kazakhstan on Saturday, Sept. 25, 2010.
(Image: © NASA/Bill Ingalls)

A Soyuz space capsule landed safely in Kazakhstan Saturday (Sept. 25), returning two Russian cosmonauts and an American astronaut to Earth after the crew solved a technical glitch that thwarted their first homecoming attempt a day earlier.

The Soyuz TMA-18 craft touched down on Kazakh steppes in Central Asia, with sunny skies and a light breeze welcoming the spaceflyers home at 1:23 a.m. EDT (0523 GMT) after 176 days living and working in space. There was no sign of the undocking glitch that marred their first departure effort the day before.

The Soyuz crew left three other crewmembers behind on the space station to finish up their own mission.

"Break a leg!" cosmonaut Fyodor Yurchikhin added in Russian in a traditional good luck message. The astronauts on the space station watched their former crewmates land via a video link, cheering when the Soyuz touched down.

The Soyuz departure from the space station just over three hours before landing was flawless, unlike the first attempt to return home.

The space station crew tried to undock the Soyuz Thursday, but a set of stuck hooks and latches refused to release their Soyuz capsule from its berth on the station's Russian Poisk docking port.

It was the first time a spacecraft had tried to undock from the port, which was just delivered to the orbiting outpost last year, NASA officials said. Space station astronauts bypassed a faulty part in the Poisk docking module using electrical cables late Thursday and fixed the glitch, they added.

On Wednesday (Sept. 22), Skvortsov relinquished his post as commander of the International Space Station to Wheelock, who is staying aboard until November.

"Today is a great day for me," Skvortsov said at the change-of-command ceremony. "Our work here is a good example of how working peacefully together we can accomplish great things."

Wheelock is remaining on the station with Yurchikhin and NASA astronaut Shannon Walker.

"It's kind of a bittersweet moment for us because we're saying farewell to some friends and we'll see them back on planet Earth shortly and we wish them a safe journey back to the planet," Wheelock said.

The three returning crewmembers took part in a busy mission that included three unplanned spacewalks to repair a crucial coolant pump that broke on the station in August.

"This was a pretty tough problem that we had and it required a lot of problem solving and we didn't have a whole lot of time to sit around and think about it," Caldwell Dyson, who participated in the spacewalks, said in a recent video. "To be a part of that is the most significant part of my mission, I think."

The spaceflyers' departure means the space station will have only half its normal crew complement of six for about two weeks until three new spaceflyers arrive Oct. 9.

A space shuttle mission — the second to last currently planned — is also scheduled to visit the orbiting laboratory soon.

The shuttle Discovery is slated to launch Nov. 1 with six astronauts aboard for an 11-day mission. The shuttle will deliver spare parts and a robotic helper to the station to help outfit it for after the shuttles retire next year.

A possible extra shuttle flight, which would launch next summer if approved, is also under consideration in Congress.