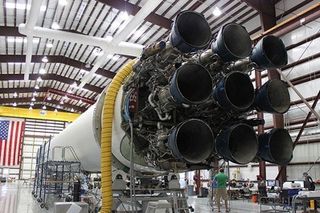 The second Falcon 9 rocket's first stage inside the hangar at pad 40.
(Image: © SpaceX)

Thedocument was later modified to reflect a June 2009initial demonstration flight. Routine resupply runs to theInternational SpaceStation were expected to follow as early as December of this year, buthardwaredevelopment has taken longer than planned. [Photos:SpaceX's First Falcon 9 Launch]

Minortweaks to Falcon9 hardware have been under way since the company completed aninternalanalysis of the vehicle's maiden launch from Cape Canaveral Air ForceStation,Fla. That mission was funded by a U.S. government agency that SpaceXhasdeclined to name and carried a qualification unit of the company'sDragon spacestation cargo capsule into orbit.

NASAspokesman Joshua Byerly said delays with new rocketsand spacecraft are to be expected.

"Theupcoming test flight is much more complicatedsince it involves not only the Falcon 9 rocket, but also the Dragonspacecraft,"he said last month. "So you are talking about two brand-new spacecraft."

This article was provided bySpaceNews, dedicated tocovering all aspects of the space industry.