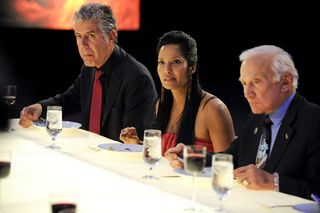 AngeloSosa's short ribs are destined for the International Space Station.

Asa 'cheftestant' on Bravo's Emmy Award-winning cable reality TV show "TopChef," Sosa won this week's episode where the challenge was to develop adish for the astronauts to eat in space.

"Myfood is going to be in outer space!" exclaimed Sosa after learning thathis concoction had won. "It is too much to embrace as a human to be honestto you. I need to breathe a little bit and process and everything."

Asit turns out, NASA needs some time to process Sosa's wintoo, to "deconstruct" his dish and make it suitable for spaceflight.

"We'regoing to try to remain as trueto the original recipe as possible but until we actually [freeze-dry] it,we won't know exactly how much modification we have to make," explainedVickie Kloeris, NASA's own 'top chef' for the International Space Station, in apost-show interview with collectSPACE.com. "It is going to be akind of trial and error thing."

Sosa'swinning recipe - "ginger-lacquered short ribs with pea puree, pickledmushrooms and horseradish cr?me fraiche" - will require at least somechanges before it can be launched to the station on a space shuttle. [Top 10 SpaceFoods]

Addressingthe chefs during the show, which aired Wednesday night, Kloeris offered heradvice as to what to include and avoid in their dishes.

"Wedo have a couple of things that we normally look at when creating freeze-dried formulations: not ahigh, high level of sugar because it doesn't freeze-dry super well, and thenalso very large pieces, ingredients tend to not freeze-dry as well," shesaid. "And a lot of our astronauts say that spicier things on orbit tastereally good."

"Ireally made a conscious effort to go light on the sugar," Sosa said."In my head I'm like, 'Oh my God, that's too sweet. It can't be too sweet[as it's] going to the space station.'"

"Ithought this dish was very sophisticated and I think might actually be easilyadaptable to an extraterrestrial situation," said guest judge and chef AnthonyBourdain during the show.

"Verytasty and then when I got the pickled mushroom ... what a surprise!"Aldrin remarked. "But I could see where it would be difficult to keepthose together in some space dish."

Kloerissaid the solution may be just that -- to divide the dish and perhaps even leavesome elements behind.

"Itis kind of three things in one and we are really probably going to have tobreak it down into separate components to be able to freeze-dry it," shesaid. "Also, the dish was served with components at differenttemperatures. We will not be able to do that."

"I'mnot even sure we are going to touch the horseradish because [the astronauts] alreadyhave a horseradish condiment sauce that is available to them on orbit,"Kloeris added. "We're looking at that, but there is a good possibilitywe'll just do away with that part of it because they add that back by using thehorseradish condiment paste they have on orbit."

Continue reading at collectSPACE.com to learnwhen Angelo Sosa?s short ribs will fly to space and how they fared as spacefood compared to the losing dish.