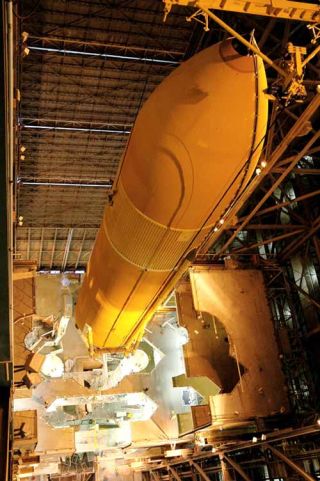 A redesigned external tank is hoisted into position as NASA engineers work to mate the tank with two solid rocket boosters inside the Vehicle Assembly Building at Kennedy Space Center. Together the tank and booster will help launch the Discovery orbiter.
(Image: © NASA/KSC.)

The piecesare coming together for NASA's first space shuttle launch in more than twoyears as engineers prepare to roll the Discovery spacecraft out of itsprotective Orbiter Processing Facility (OPF).

The twinsolid rocket boosters and a redesignedexternal fuel tank that will carry Discovery into orbit later this yearstand already assembled in the vast Vehicle Assembly Building (VAB) at NASA'sKennedy Space Center (KSC) in Florida. They await delivery of Discovery, which iscurrently set for no earlier than next week, and NASA officials hope the entireassembly will roll out to the launch pad by the end of the month.

NASA iscurrently targeting a mid-May launch for Discovery's seven-astronaut crew, witha flight window stretching from May 15 to June 3, though some officials havehinted that preparations are lagging behind, according to an MSNBC.comreport Wednesday.

But orbiterground crew officials have told SPACE.com that Discovery is very closeto being ready for integration.

"Themajority of the work is done [and] all the testing is completed," said StephanieStilson, NASA's vehicle manager for Discovery, during a telephone interviewearlier this month. "Rolling over and rolling out, that's huge for the [ground]team."

Discovery'sSTS-114 spaceflight is expected to be NASA's first shuttle mission since theloss of seven astronauts aboard the Columbia orbiter on Feb. 1, 2003. Thatshuttle broke apart during reentry after sustaining critical damage to its leftwing during launch. The STS-114 flight is aimed at demonstrating new safetytools and methods developed over the last two years, as well as deliveringfresh cargo to the International Space Station.

Part of the workremaining for Discovery's flight includes the installation of a new digital camera tothe orbiter's underside. Wiring for the camera, which replaces an olderfilm-based system, is already in place though the actual imager willbe installed once the orbiter is inside the VAB, NASA officials said.

Like itsfilm-based predecessor, the digital camera will snap images of Discovery'sexternal tank as it separates from the shuttle in orbit. It is expected to yield high-resolution images thatwill be transmitted directly to mission control from space. During previousflights, mission managers had to wait until a shuttle landed to obtain the filmnegatives and observe the separation event.

Stilsonsaid that, while rolling Discovery over to the 52-story VAB for integration is amajor step toward returning the shuttle fleet to flight status, the orbiter isalso coming out of a maintenance period that included some 267 modifications,of which about 20 were return-to-flight related.

"It's onething to be excited for return-to-flight," she added. "In the OPF, we havedifferent milestones, including the first time we powered the orbiter up afterhaving powered down for a year."

Stilsonalso said her team has been in close contact with the ground crews working onAtlantis, NASA's second shuttle to fly after Discovery during the STS-121 mission, in order to streamline orbiter preparations.

Atlantisshuttle officials marked their own milestone this week with the arrival of anew external tank at KSC.

Among thenext tasks for Discovery's crew, however, is a March 18 check out of the shuttle'spayload,said Lawrence, who will oversee the transfer of food, equipment and other cargobetween the shuttle and space station in the STS-114 spaceflight.

During thecheck out, Lawrence and fellow STS-114 mission specialist Charlie Carmada planto look over the Italian-built Raffaello cargo module, as well as two platformsthat will be installed in Discovery's payload bay to carry replacement partsand other equipment.

"We need tolook at the hardware so we can close out the bag," Lawrence said.