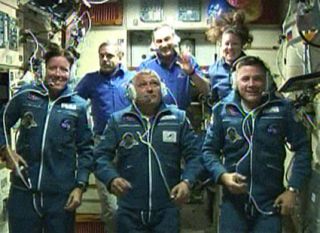 The new Expedition 24 crew members are welcomed aboard the International Space Station during a ceremony shortly after the hatches between the two vehicles were opened on June 17, 2010.
(Image: © NASA TV)

A Russian Soyuz spacecraft linked up with the International Space Station Thursday with two American astronauts and a Russian cosmonaut aboard on a mission that doubled the outpost's population and may see the last NASA shuttle flight ever to visit the orbiting lab.

The Soyuz TMA-19 docked with the space station at 6:21 p.m. EDT (2221 GMT) as both spacecraft flew 220 miles (354 km) over the Atlantic Ocean near Argentina. The orbital arrival boosted the space station's crew back up to full strength, with six people now living at the orbiting lab.

"We had a great launch and a great docking," cosmonaut Fyodor Yurchikhin, of Russia's Federal Space Agency, told Mission Control in Moscow after the two spaceships hooked up. Yurchikhin commanded the Soyuz flight to the station, which began two days earlier with a dazzling predawn launch from the Central Asian spaceport of Baikonur Cosmodrome in Kazakhstan.

Thursday's Soyuz docking also marked a milestone for women in space. For the first time, there are two female astronauts — NASA astronauts Shannon Walker and Tracy Caldwell Dyson — serving together on a long-duration spaceflight.

Russian officials at Mission Control in Moscow called the two women "the better half" of the space station crew.

Walker arrived on the new Soyuz, while Caldwell Dyson has been living on the space station with two Russian crewmates since early April. Their four male crewmates include three Russians and one American.

The two women are flying together on a mission peppered with female spaceflight anniversaries. Friday is the 27th anniversary of the first launch of an American woman into space (NASA astronaut Sally Ride) on June 18, 1983. When the Soyuz TMA-19 blasted off with Walker and her crewmates earlier this week, the local time at their launch site was early morning on June 16 — the 47th anniversary of the launch of the first woman in space, cosmonaut Valentina Tereshkova.

The record for most women in space at the same time is currently four, a number reached in April during a NASA shuttle mission.

While the new crew settles into life aboard the space station, NASA flight controllers are keeping a close watch four pieces of space junk expected to fly close by the orbiting laboratory this weekend. Two Russian pieces of space trash and a chunk from a destroyed Chinese satellite will zip by the station early Sunday. Another piece will fly by the station early Friday.

NASA engineers are evaluating the station's current orbit, now that the Soyuz has docked, to determine if any avoidance maneuvers will be required to dodge the wayward space junk, according a daily station report.

Yurchikhin and Walker arrived at the station with NASA astronaut Douglas Wheelock. The trio is beginning a 5 1/2-month spaceflight that, if all goes according to plan, should host the two final space shuttle missions before NASA retires its space plane fleet later this year.

After that, NASA plans to rely on Russian Soyuz spacecraft to ferry astronauts to the space station until commercial American spacecraft become available.

Wheelock has said seeing the end of NASA's storied shuttle program during the flight will be bittersweet, but he looked forward to preparing the space station to continue flying after the shuttle era now that it has been extended through at least 2020.

"We're very excited about that and that's probably the biggest task that we have, is bringing the station to full utilization," Wheelock said before launch. Wheelock and Yurchikhin are veteran spaceflyers and are making their second trip to the space station.

This mission marks the first for Walker, who is the city of Houston's first native astronaut to fly in space. Houston, Texas has served as the headquarters of NASA's astronaut corps and Johnson Space Center for more than 40 years.

During a congratulatory video broadcast, Walker told fellow NASA astronaut Catherine Coleman — another female spaceflyer flying to the station this year — that launching into space was almost indescribable. She's been smiling since the Soyuz rocket engines were lit, Wheelock added.

Walker is also married to fellow NASA astronaut Andrew Thomas, who has flown to the International Space Station and lived for months on Russia's Mir space station.

Thomas watched his wife launch into space earlier this week.