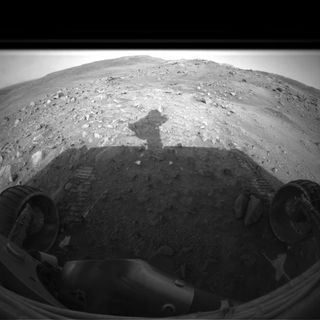 Mars scientists and engineers are elated about a dust-busting blast that has struck the Spirit rover at its Gusev crater exploration site.

Turns out that a martian whirlwind - dubbed a dust devil - likely zoomed over the robot high up in the Columbia Hills. That fleeting flyby effectively cleaned Spirit's solar arrays, giving the robot a new lease on life.

Engineers report that the rover's power reading quickly shot up to almost as high as when the rover landed on Mars over a year ago.

Rover scientists suspected something was up at the Gusev site when Spirit's wheel tracks were disappearing. Onboard cameras could look down and see the tracks vanishing. Rover team members assumed that the site was experiencing a heavy dust loading in the atmosphere.

"Gusev was alive with dust devils," explained one scientist familiar with rover operations.

But suddenly Spirit's available energy rocketed to a high level. The plus-up in power, team members believe, was due to a whirlwind passing right over the robot, removing the dust that had collected on its solar cells.

The impact of the devilish dust-off was significant.

"The noon solar output from the panels went from a 40 percent loss to just 7 percent," said rover science team member, Larry Crumpler, a research curator in volcanology and space sciences at the New Mexico Museum of Natural History and Science in Albuquerque.

Images of the panels taken later showed "beautiful dark panels," Crumpler explained. "And all the wires and edges on the [rover] deck have little dust tails. I think it might have been the Martian squeegee men. Either that or one heck of a buffeting by a dust devil," he said.

Spirit has been busy wrapping up a spectacular panorama from the vantage point of "Larry's Lookout."

Earlier this month, lead investigator for the Mars Exploration Rover mission, Steve Squyres of Cornell University, noted that Spirit's depleted power was reducing the number of hours per day available to snap photos.

Squyres couldn't gauge the chance of what he called a "miracle cleaning event" - akin to what occurred months ago on Opportunity, its sister robot on the other side of Mars. "If it happens, I'll take it!"

"We have to assume the worst...that the solar panels are going to stay dirty and just get dirtier," Squyres told SPACE.com at the time.

As to what caused Opportunity's solar panels at Meridiani Planum to become cleaned is a puzzle, Squyres said. "Wind has to be involved at some level you figure. Frost might have helped. A frost build-up on arrays could coagulate the dust...but the fact is that we don't understand it very well. But I'll take it."