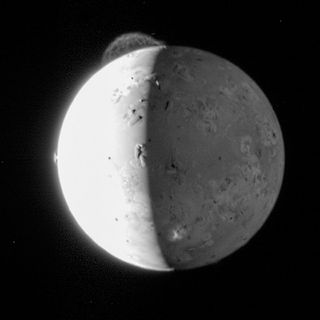 A composite image of Jupiter's moon Io. Volcanic plumes of gas spew sulfur dioxide hundreds of miles into space, as seen by the New Horizons spacecraft. Such activity accounts for a small chunk of the moon's immediate atmosphere, but eventually freezes and builds up a store of the material.
(Image: © NASA/Johns Hopkins University Applied Physics Laboratory/Southwest Research Institute)

Whenit comes to where extraterrestrial life might dwell in our own solar system,Jupiter's moon Europa often grabs the spotlight. However, its extraordinarilyvolcanic sibling Io might be a possible habitat as well.

Abit larger than Earth's moon, Iois the innermost of Jupiter's large satellites and the most volcanically activebody in the solar system, with plumes of matter rising up to 186 miles (300 km)above the surface.

Thisextremeactivity is the result of Jupiter's powerful gravitational pull, which causesIo's tormented solid crust to bulge up and down 328 feet (100 meters) or more,generating intense heat in Io due to friction. Although the heat near thevolcanoes can reach some 3000 degrees F (1649 degrees C), high enough to keeplava liquid, Io's surface temperature averages at about negative 202 degrees F(-130 degrees C), leading to sulfur dioxide snowfields.?

Thismeans Io is a land of both fire and ice.

Iois generally considered a poor candidate for life because of all the radiationJupiter blasts it with. In addition, no organic molecules have been detected onits surface, and it has only an extremely thin atmosphere devoid of detectablewater vapor.

Still,conditions on Io might have made it a friendlier habitat in the distant past.If life did ever develop on Io, there is a chance it might have survived to thepresent day, Schulze-Makuch suggested.

"Life on the surface is all but impossible, but if you godown further into the rocks, it could be intriguing," he said. "Weshouldn't categorize it as dead right away just because it's so extreme."

Computermodels suggest Io formed in a region around Jupiter where water ice wasplentiful. Io's heat, combined with the resulting possibility of liquid water,could have made life plausible.

?Theremust have been quite a lot of water on Io shortly after formation, judging fromthe amount of water ice on Europa and Ganymede,? said Schulze-Makuch. ?

Jupiter'sradiation would have stripped this water from Io'ssurface, perhaps within10 million years.? At this point life could have retreated underground, wherewater might still be abundant, and geothermal activity and sulfur compoundscould provide microbes with sufficient energy to survive.

Althoughno organic molecules have been detected on the moon?s surface, that does notmean they do not exist underground, Schulze-Makuch said. Any organic compoundsthat once existed on the surface or that may today still emanate from thesubsurface ? which probably were naturally present in this region of spaceduring Io's formation ? would get quickly destroyed by Jupiter's radiation.

Themany lava tubes thought to exist on Io could serve as an especially favorableenvironment for life, Schulze-Makuch suggested, by protecting organisms fromradiation.?

Thelava tubes also could provide thermal insulation, trapping moisture andproviding nutrients such as sulfurous compounds. Microbes are common in lavatubes on Earth, from ice and volcano zones in Iceland to hot sand-floored tubesin Saudi Arabia, and lava tubes are the most plausible cave environment forlife on Mars, he added.

Theprimordial soup that any life on Io might have originated from was likely basedon water, but the solvent of choice for organisms there might have drasticallychanged later on as the moon transformed.

Hydrogensulfide is one choice, as it is reasonably abundant in Io's shallow subsurfaceand remains liquid from negative 123 to negative 76 degrees F (-86 to -60 degreesC), falling within the environmental conditions that would prevail there. Whileit is not especially efficient as a solvent for ions, it does dissolve manysubstances, including many organic compounds. Other possibilities includesulfur dioxide and sulfuric acid.

Given the wild extremes Io can swing through as it orbits Jupiter,one possible survival strategy for life in this challenging environment would be toremain dormant most of the time, only reverting back when nutrients were rich."It'd be much easier for life to take a beating if it goes dormantregularly," Schulze-Makuch said.

AlthoughEuropa and Ganymede are higher priority targets for future explorationmissions, Io should not be neglected, said Schulze-Makuch. "Much insightcould be gained by sending a radiation-resistant robotic probe capable ofdetecting the chemistry and physical state of subsurface and surface liquids onIo," he noted, perhaps as part of a larger mission to the Jovian system.

"Iknow the chances of life on Io are low, and even if there is some microbiallife in lava tube caves in its crust, in the short term there's no way for usto get there," he added. "But let's not totally exclude Io onlybecause it seems strange or foreign."

If a mission to Io is extraordinarily lucky enough to find life insuch an unlikely environment, "then it would make life elsewhere in thegalaxy seem much more likely," Schulze-Makuch said. "It would reallybroaden our horizons."

Schulze-Makuchdetailed his ideas in the February-March issue of the Journal of Cosmology.